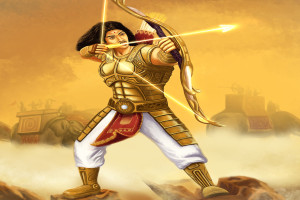 Bhagavāna believes that Arjuna still needs purification of antaḥkaraṇa and therefore, he should perform karma arising from his duties

The question is if I stay active; but, ceremonially renounce the actions arising from duties, accept vividiṣā sanyāsa (giving up karma for the pursuit of knowledge) and then abide in the self, won’t naiṣkarmya (a state of being actionless) be gained through self-knowledge?

In response to this question, Bhagavāna says that taking sanyāsa (renunciation) before purifying the mind, naiṣkarmya cannot be achieved/gained. Why?

Because, such a sanyāsī (renunciate) who has renounced the world stays away from viṣayas, also attempts to meditate upon ātma by keeping the body steady and closing the eyes. However, what does he meditate upon? He meditates upon the viṣayas that he has renounced. His attachment or interest towards the viṣayas is not gone yet. Rāga and dveṣa, meaning tamasa and rajasa are still in his mind and his mind is not sātvika yet, not pure yet. He does not have internal happiness or peace in his mind. Although without obeying the internal frustration, if he remains inactive firmly, his mind will continue to wish for different things to satisfy his rāga-dveṣa. In this manner, by renouncing the viṣayas outwardly but pondering upon them in the mind, he is a person of false conduct according to Bhagavāna. There is no harmony between his thoughts and conduct. He is wasting his time. Not only that, he is nurturing the reasons for different types of complexity. He is ubhayabhraṣṭa (corrupt in two ways), he is not able to abide in either karma or jñāna. He is deprived of the benefits of both. As long as there is rāga-dveṣa in the mind and restlessness arises from it, rāga-dveṣa should be addressed appropriately, rāga-dveṣa should be expressed by performing action. The collected rāga-dveṣa continually diminish if karma is performed in a way that does not create new rāga-dveṣa and in this manner, antaḥkaraṇa (mind) gets purified. Therefore, Bhagavāna says that a virtuous active person who is performing karma with his karmendriya (organs of action) having an attitude of yoga is better than deceiving, inactive person. Bhagavāna believes that Arjuna still needs purification of antaḥkaraṇa and therefore, he should perform karma arising from his duties. Bhagavāna says:

(O Arjuna) Do the action that is to be done because action is superior to inaction, and due to inaction, even the maintenance of your body would not be possible.

Bhagavāna says that you perform niyata karma (the action that needs to be performed). Niyata means whatever is decided for a person. Each person is part of one or the other order, for example, family, community, town, state, country, etc. Because he is part of such an order, he has been benefiting from it and therefore, he has a responsibility toward such an order also. The creation of the world is such that everything is related to each other, dependent on each other and there is nothing that is independent for its existence or nourishment. The world is an order and whatever exists in it gets a benefit from it. Therefore, everyone who gets benefit from that order has a responsibility toward it also. Creatures other than humans contribute to this order on their own because they do not have freedom for their behavior, meaning, by nature they behave as they should. However, a human being has free will for his behavior and therefore, out of selfishness, rāga-dveṣa and impulses arising from them, he can behave in such a way that there can be interruption in the order and harmony of the world. By doing this, he harms himself and the world. Therefore, humans need guidance to decide how to behave. Considering this only, there is advice in Vedas about varṇāśrama dharma and its appropriate duties.

Parents have given me a gift in the form of the body. They nurtured and raised me. I am who I am because of my parents. And, I am who I am because of my ancestors through my parents. Therefore, I am indebted to ancestors and therefore, it is my duty to settle that debt. By serving the parents and elders and by doing the rituals of śrāddha, tarpaṇa etc, the debt is settled. To perform the duties toward parents, elders and ancestors is a part of overall duties for a human being.

ṛṣis have uncovered the treasure of knowledge for us. We include all the scientists, thinkers, teachers of the world in the term ṛṣis because they have direct or indirect contribution to whatever knowledge we have received. I am indebted to ṛṣis for whatever knowledge, skills and expertise I have. This is another debt which needs to be settled by sādhanā (practice) for knowledge and by promoting the knowledge.

Third debt is to devatās, īśvara. Īśvara operates the world through devatās and universal factors. Devatās such as sun, moon, wind, fire, water, earth etc. are continuously serving me. Also, they are residing in my body as aṅśa (part) of them and operate jñānendriyas (organs of knowledge), karmendriyas (organs of action) etc. Therefore, I am also indebted to them. By worshiping īśvara and devatās, this debt is to be settled.