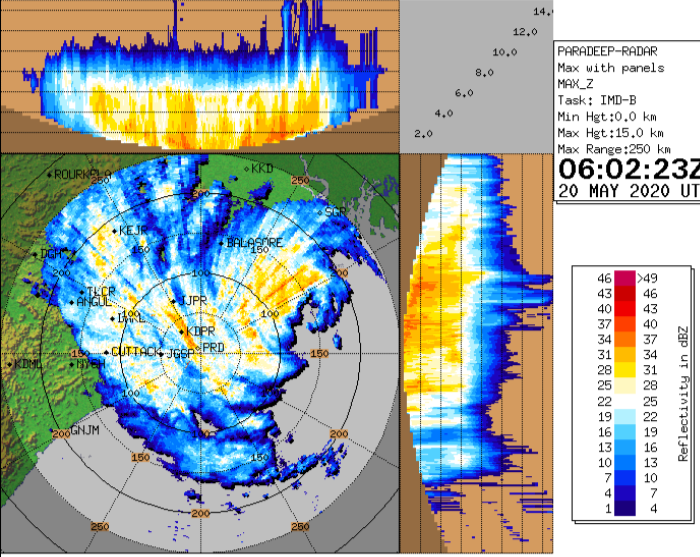 Bhubaneswar: Residents of coastal Odisha, primarily those of Kendrapara, Jagatsinhpur, Bhadrak and Balasore heaved a sigh of relief as cyclone Amphan passed of the Odisha coast without causing much damage. And peacefully, enough.

In the morning, wind speed turned menacingly higher and trees fell. However, we were quite surprised at around 1pm it slowed down and rain almost came to a halt. We were happy but fear was still in our mind’, said a Jagatsinhhpur based senior journalist with an Odia daily. Prior to 1 pm, the journalist added, road communication had been blocked, though briefly due to the fallen trees. The betel vine owners in Ersama block have been badly affected’, the journalist informed. “I am pretty sure, kucha houses must have been damaged,” the journalist said.

Jagatsinghpur district had witnessed unimaginable destruction and was the epicenter of, the 1999 super cyclone that had killed 1000 people in Odisha.

In capital Bhubaneswar, weather turned better in Bhubaneswar and shops in different markets opened post 3 pm. All, of course, followed the government’s COVID 19 regulations. “No one wanted a cyclone during a health crisis (COVID 19), Ashok Jena, 49, who runs an electrical goods shop, said. “Perhaps, nature was kind on us.”

On the other hand, many like Prahlad Nayak, 37, a farmer in Shankarpur village of Tihidi block under Bhadrak district were skeptical that the cyclone may show its color even after learning that it had passed off towards West Bengal from TV news. “It’s nature, sir. One can’t be sure before the actual landfall.’ Prahlad believed.

Also read: “We are scared the wind speed may turn furious as the cyclone inches closer”

According to Sisir Ranjan Rout of Chhatrapur in Ganjam district, the weather was near perfect from around 11 am. “We didn’t feel the cyclone. This time it’s as cool as watching a movie,” Rout. 41, who works as sales manager with a private company, said with a smile.

However, according to some residents in Nuagaon panchayat and the adjoining ones- on near the coast- in Baleswar district’s Baliapal block, heavy wind along with rain was experienced till the early evening hours. “Many trees have fallen here, kuccha houses have been damaged too. All the jack fruits in my tree have fallen,” rued a fifty something farmer. Sarpanch of Nuagaon Barendra Nathan Dalai, seemed satisfied that the 130 people in the cyclone shelters under his panchayat had been well taken care off.

Experts hoped the government would carry out and complete damage assessment as soon as possible and assist the affected ones for the revival of their livelihood.

“Those whose thatched houses have been damaged will have to be given adequate assistance and more importantly the government will have to ensure that livelihood of the people-betel vine owners, fisher folks- are restored in quick time. They have already been in stress due to COVID19,” activist, Jagadananda said.