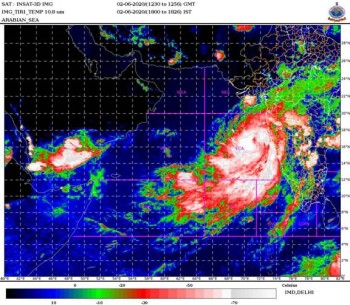 New Delhi: The Cyclonic Storm ‘NISARGA’ is very likely to intensify during next 12 hours and is very likely to cross north Maharashtra and adjoining south Gujarat coast between Harihareshwar and Daman, close to Alibagh (Raigad District, Maharashtra)  tomorrow afternoon  as a Severe Cyclonic Storm with a maximum sustained wind speed of 100-110 kmph gusting to 120 kmph.

Fishermen are advised not to venture into Eastcentral and Northeast Arabian Sea and along &off  Karnataka-Goa-Maharashtra-south Gujarat coasts till Wednesday.

The cyclone is likely to cause major damage to thatched houses, huts, roads, coastal crops, salt pans and uproot trees. Roof-tops may blow off and Unattached metal sheets may fly. It is also likely to cause damage to power and communication lines.

On Tuesday, Prime Minister Narendra Modi reviewed the emerging situation in the wake of cyclone conditions and urged people to take all possible precautions and safety measures.

Also read: Centre braces up for cyclone in Arabian sea

With the cyclonic storm Nisarga brewing in the Arabian Sea, all teams have been put on alert and are in readiness to respond to any requirement of Humanitarian Assistance and Disaster Relief (HADR)  during the storm period.

National Disaster Response Force (NDRF) has deployed 40 teams in the States and Union Territories and additional teams are also being airlifted. Rescue and relief teams of the Army and Navy along with ships and aircrafts of the Navy and Air Force have been put on standby. Ships of the Coast Guard are already engaged in rescuing fishermen at sea.

In Mumbai, the Maharashtra Naval Area has been kept  on standby with five Flood Rescue Teams and three Diving Teams throughout the monsoon season. These teams are stationed at various naval areas across the city to enable early response over a larger area. “These teams are fully equipped and have been trained for rescue operations. Recce of known flood-prone areas has been undertaken and all necessary preparations are in place,” a defence ministry release stated.

Similar arrangements have been set up within the Karwar Naval Area, the Goa Naval Area as well as Gujarat Daman and Diu Naval Areas. The respective Area and Station Commanders are in touch with the State authorities, NDRF, and State Disaster Response Force to be able to respond to a crisis situation in the shortest possible time. Ships of the Western Fleet have been also embarked with Humanitarian Assistance and Disaster Relief (HADR) bricks to provide succour to coastal areas inundated due to heavy rain.

Forecast track and intensity are given in the following table: