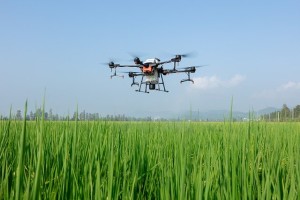 New Delhi: In face of locust attack in several states, for effective control of locusts on tall trees and in inaccessible areas, 5 companies with 12 drones have been deployed for spraying of pesticides for locust control in the states of Rajasthan, Madhya Pradesh, Uttar Pradesh, Haryana, Gujarat, Punjab and Maharashtra. This has made India the first country which is using drones for locust control after finalizing all required protocols. Major operations have been concentrated in Rajasthan where maximum resources are committed. In addition, State governments have also deployed tractor mounted sprayers and fire tender vehicles in large numbers to undertake locust control in cropped area.

The Ministry of Agriculture and Farmers Welfare stated on Saturday that the Locust Warning Organization and 10 Locust Circle Offices in coordination with State Governments had also undertaken locust control operations in schedule desert areas of Rajasthan and Gujarat. The State Governments through their Agriculture Departments undertook locust control in cropped area.

This year starting from 11th April 2020, in this season 1,27,225 hectares had been controlled till june 26, the ministry stated. It referred to one swarm of 2 km x 4 km size which was previously controlled in Jhunjhunu district (Rajasthan) on Friday June 26, moved to Rewari district in Haryana. This swarm in Rewari was controlled by the State Agriculture Department deploying 40 tractors and 4 fire brigade vehicles, it claimed. Two Ground control teams and officers of Locust Circle office were also present and joined them. Control operations were carried out from midnight to early morning hours on Saturday. However the left over swarm initially moved towards Jhajjar district in the morning and thereafter turned towards east following the wind direction. This swarm split into 3-4 smaller swarms. One moved towards Nuh (Haryana) and two swarms moved over Gurugram, moving further towards U.P.

“Two teams deployed in Haryana are following these swarms. Five more ground control teams have been moved from Nagaur and Jaipur in Rajasthan to join the operations in U.P. Drones have also been moved from Jaisalmer to join operations. State Agriculture Departments of Haryana and Uttar Pradesh have been continuously kept informed and they are making necessary arrangements for control wherever the swarm finally settles,” the ministry stated.