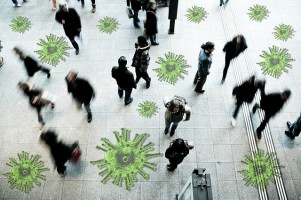 Geneva: The World Health Organisation (WHO) has made it categorical that while the COVID-19 outbreak was accelerating, “we have clearly not reached the peak of the pandemic”.

With several scientists now pointing at the “evidence” of airborne transmission of the dreaded virus, WHO Director General Dr Tedros Adhanom Ghebreyesus, without referring to these reports, said in a press conference here, “the organisation will continue to communicate the latest scientific advances to the media and general public as we have them”.

It may be mentioned that on Monday a New York Times report had referred to an open letter to the WHO by 239 scientists in 32 countries, who had “outlined the evidence” showing that smaller particles can infect people, and called for the agency to revise its recommendations. According to the NYT report, the researchers planned to publish their letter in a scientific journal.

The Infectious Diseases Society of America (IDSA) on July 6  accepted the manuscript of their research paper titled It is Time to Address Airborne Transmission of COVID-19 prepared by Lidia Morawska and Donald K Milton. While Lidia is from International Laboratory for Air Quality and Heath, WHO Collaborating Centre, Queensland University of Technology, Brisbane (Australia), Donald is from Institute for Applied Environmental Health, University of Maryland School of Public Health, Maryland (USA).

They wrote in the paper that together with the authors, “239 scientists support this Commentary”. The affiliations and contact details of these scientists were listed in the Supplementary.

In the research paper, which has been kept as an Open Access article,  the researchers stated: “We appeal to the medical community and to the relevant national and international bodies to recognize the potential for airborne spread of COVID-19. There is significant potential for inhalation exposure to viruses in microscopic respiratory droplets (microdroplets) at short to medium distances (up to several meters, or room scale), and we are advocating for the use of preventive measures to mitigate this route of airborne transmission.”

The Studies by the signatories and other scientists, the authors stated,  “have demonstrated beyond any reasonable doubt that viruses are released during exhalation, talking, and coughing in microdroplets small enough to remain aloft in air and pose a risk of exposure at distances beyond 1 to 2 m from an infected individual. For example, at typical indoor air velocities, a 5 μm droplet will travel tens of meters, much greater than the scale of a typical room, while settling from a height of 1.5 m to the floor”.

While mentioning that most public health organizations, including the World Health Organization (WHO), do not recognize airborne transmission except for aerosol-generating procedures performed in healthcare settings, it cautioned that while precautionary measures such as hand washing and social distancing were “appropriate,” they were  “insufficient to provide protection from virus-carrying respiratory microdroplets released into the air by infected people”.  This problem, it stated, was “especially acute in indoor or enclosed environments, particularly those that are crowded and have inadequate ventilation…”

It added: “It is understood that there is not as yet universal acceptance of airborne transmission of SARS-CoV2; but in our collective assessment there is more than enough supporting evidence so that the precautionary principle should apply.”

It warned that this matter is of heightened significance now, when countries were re-opening following lockdowns. “We hope that our statement will raise awareness that airborne transmission of COVID-19 is a real risk and that control measures, as outlined above, must be added to the other precautions taken, to reduce the severity of the pandemic and save lives,” it stated.

WHO Director General Dr. Ghebreyesus, though on Wednesday stated that the WHO “continues to work with technology companies to make sure people have access to accurate health information and resources on COVID-19”.

He stated that over the past few months, there had been a lot of discussion about the origins of COVID-19. “All preparations have been finalised and WHO experts will be traveling to China this weekend to prepare scientific plans with their Chinese counterparts for identifying the zoonotic source of the disease,” he said, adding that the experts will develop the scope and terms of reference for a WHO-led international mission. “The mission objective is to advance the understanding of animal hosts for COVID-19 and ascertain how the disease jumped between animals and humans,” he said.

The Director General acknowledged that  it took 12 weeks for the world to reach 400 thousand cases of COVID-19. He informed that there had been now 11.4 million cases of COVID-19 and more than 535,000 lives had been lost.

He announced that now the WHO had  partnered with Facebook and Praekelt.org to provide WHO’s COVID-19 information in Free Basics and Discover, in a mobile-friendly format. “Through this collaboration, we will reach some of the most vulnerable people who will be able to access lifesaving health information without any data charges in more than 50 countries,” he said.

In the meantime,the UN Secretary-General, in his capacity as the depository of the 1946 Constitution of the WHO, was in the process of verifying with the World Health Organization whether all the conditions for USA’s withdrawal from the WHO were met, Stéphane Dujarric, Spokesman for the Secretary-General, told mediapersons on Wednesday.

“The US’ participation in the World Health Organization was accepted by the World Health Assembly with certain conditions set out by the United States for its eventual withdrawal from WHO.  Those conditions include giving a one-year notice and fully meeting the payment of assessed financial obligations,”Dujarric said.

1 thought on “Scientists make their report about potential for airborne spread of COVID-19 as “Open Access Article”; WHO DG is silent on their claim”