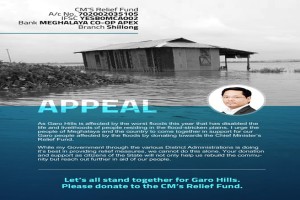 Shillong: Five persons have died in floods in western Garo Hills region of Meghalaya and 1.52 lakh people have been affected, Chief Minister Conrad K Sangma said on Tuesday. In neighbouring Assam, floods have affected over 24 lakh people in 24 districts and with the deaths of two people in Morigaon and Nagaon districts, the death toll  reached  87 on Tuesday. Already 44,498 people are in 397 relief camps across the state, government sources said.

Taking to twitter on Tuesday, Sangma stated: “Saddened to see 5 lives lost because of the floods in #GaroHills. Govt has released an ex gratia amount of Rs. 4 Lakhs each to the next of kin of the deceased. We are doing everything to ensure the safety of our citizens during this time. Our condolences to the bereaved families.”

Home Minister Amit Shah spoke to the Chief Minister and assured him all possible help from the Centre.

The Regional Meteorological Centre in Guwahati forecasts heavy to very heavy rainfall at isolated places in Assam and Meghalaya on Wednesday.