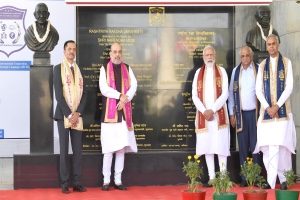 The National Defence University is already working with many organizations in different fields to provide guidance to them to fulfil their needs.

The National Defence University will open its campuses region-wise, Shah said and added that the university will provide both a good environment and infrastructure to professionally train students working at three levels of recruitment – Constable, PSI and DYSP – to handle law and order.

Shah said that a law university, a forensic science university as well as a national defence university were the three major initiatives of Narendra Modi when he was the Chief Minister of Gujarat. All these three aspects related to law and order at a university connected the youth with training from the very outset. “Modi made large scale systemic changes in Gujarat and placed a model before the country, that if students are trained in a particular area, then they will be able to come forward and contribute in their area of training,” Shah said.

1 thought on “PM dedicates National Defence University to the nation”