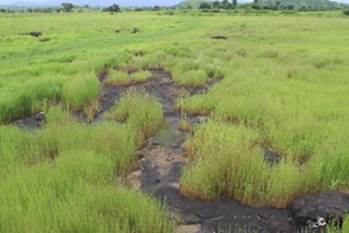 The new plateau discovered in Thane district of Maharashtra

Thane: A rare low-altitude basalt plateau housing 76 species of plants and shrubs from 24 different families discovered in the Thane region in the Western Ghats—one of the four global biodiversity hotspots in India, can prove to be a repository of information for species interactions. It can help study the effects of climate change on species survival and increase awareness of the conservation needs of rock outcrops and their immense biodiversity value in the global context.

The Western Ghats is one of four global biodiversity hotspots in India, and Agharkar Research Institute (ARI) in Pune has been studying its biodiversity, particularly its rock outcrops, for a decade.

The ARI team led by Dr Mandar Datar recently discovered a rare low-altitude basalt plateau in Manjare village, Thane district. This is the fourth type of plateau to be identified in the region; the previous three are laterites at high and low altitudes and basalt at high altitudes.

Surveying the plateau, the team documented 76 species of plants and shrubs from 24 different families. The authors believe this is an important discovery, as the plateau shares the vegetation with the three other rock outcrops, simultaneously holding a few unique species. This gives a unique model system to study the species’ interactions in varying environmental conditions.

The research paper published recently in Springer Nature journal and National Academy of Science Letters has highlighted the importance of the newly discovered low-level basalt plateau located in Manjare Village of Thane district in the Northwestern Ghats, standing 156 metres above mean sea level.

It may be mentioned that plateaus are dominant landscapes in the Western Ghats, significant because of the predominance of endemic species. They are classified as a type of rock outcrop and provide a unique and challenging environment for species to adapt to. These outcrops have seasonal water availability, and limited soil and nutrients, making them ideal laboratories to study the effects of climate change on species survival. Plateaus are thus a valuable source of insight into how species can survive in extreme conditions.