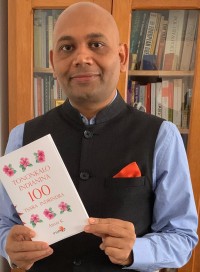 Ambassador Abhay K. with the first ever book of Indian poems in Malagasy language last year

Antananarivo (Madagascar): Our Bihari boy has done it again! After scores of poems, anthology and even an highly acclaimed anthem each on Earth, Moon and Mars, poet-diplomat Abhay K. has achieved yet another milestone by getting over 300 years of Indian poetry from 28 Indian languages translated into Malagasy language. This is the first ever translation of Indian literature into Malagasy.

“A hundred poems from 28 Indian languages spanning over 3000 years of Indian Poetry has been translated and published into Malagasy, the language spoken in the world’s oldest island of Madagascar, located in the Indian Ocean, for the first time, creating a literary bridge between India and Madagascar,” Abhay, who is at present serving as Indian Ambassador to Madagascar and Comoros, told globalbihari.com here on Thursday.

The translators include well known poets and writers of Madagascar such as Mose Njo, a popular Malagasy writer and artist, Placide Alex Tsarahevitra, and Malagasy poets Tsiky Koloinjanahary Rabe, Head of the English Department at the University of Antananarivo Dr. Haja Lalao Razanamanana, poets J.L. Razafy, Andréa Lalatiana Maholy Razanadrasoa, poet and writer Fanza Rakotondrainibe and Malagasy poet and diplomat Jeannie Rafalimanana who writes with pen name Thina. Well-known Malagasy writer Michelle Rakotson, went through the translations and gave her very useful feedback which were incorporated in the final translations.

The book has been published by Malagasy publisher Tsipika Editions, which has also published J.J. Rabearivelo, Madagascar’s greatest poet and Africa’s first modern poet.  100 Great Indian Poems edited by poet-diplomat Abhay K. has so far been translated and published into Portuguese by University of São Paulo, Brazil, into Spanish by Universidad Autonoma de Nuevo León, Monterrey, Mexico, into Italian by Edizioni Efesto, Rome, Italy earlier. It has also been translated into Irish/Gaelic by well-known Irish poet Gabriel Rosenstock, into Nepali by poet Rajendra Bhandari and into Russian and French by well known Russian and French poets. This is for the first time that Indian poetry from over two dozen languages spanning over 3000 years have been translated into so many foreign languages including UN languages such as Spanish, French and Russian apart from English.
Abhay said he was  currently editing an anthology of Great Indian Love Poems from various Indian languages which was scheduled to come out later this year.