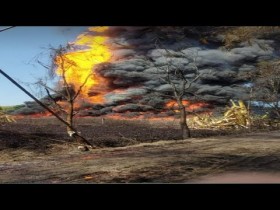 Fire raging at gas well as Baghjan in Tinsukia district

Guwahati: A massive fire erupted at  a natural-gas producing well – Baghjan-5 – of Oil India Limited (OIL) at Baghjan in Tinsukia District on Tuesday afternoon. Eyewitness reports suggest the fire may spread to adjoining areas if not contained and the Dibru-Saikhowa national park is also under threat.

An OIL spokesperson said the well caught fire when the clearing operations were on at the well site. “There is no casualty reported except minor injury to a fireman from ONGCL (Oil and Natural Gas Corporation Limited). Fire tenders are at the site controlling the spread of fire. There are violent protests around the well site. Once the situation is normal, the experts will move to the site,” the spokesperson said.

A release from OIL further stated that the current situation would be brought under control “by the experts”.

It may be mentioned that following blowout in the gas well on May 27, gas had been leaking from the well for the last 14 days. A press handout of OIL, on June 5 had stated that the well was flowing gas “uncontrollably” even as pumping of water to the well through the casing valve was in progress to minimize chances of fire.  It had further stated that OIL fire service and with mutual aids were stationed 24×7 at site since 27 -05- 2020 for continuously water jacketing the well to avert any eventuality.

Today after the fire, as there were violent protests around the well site, OIL officials made a request to Assam’s Chief Secretary and Tinsukia district administration for maintaining law and order “so that the experts are allowed to enter the site and start the well control operations”.

“Post the incident, emergency meetings are underway with ALERT team (M/s Alert Disaster Control — a Singapore-based firm had visited the well site on June 8 to assess the available facilities for well control operation and for preparation of the plan of action). They have expressed that it is now a safe environment for working and are confident that the situation can be controlled and the well can be capped safely,” an OIL spokesperson stated. He added: “The situation demands arrangement of large quantities of water, installation of high discharge pumps and removal of debris… Transfer of well killing equipment to the site is in progress…Arrangement for creting water umbrella is in progress. Digging of water reservoir and preparation of placement of high capacity water pumps are in progress…Environmental Impact Assessment is in progress…”

The company stated that all the operations “as per ALERT will take about 4 weeks”. It though added that “efforts will be made to reduce this time frame as much as possible”.

Today’s fire has put a question mark on such claims and the Forest and Environment ministry’s criteria for granting such environmental clearances.