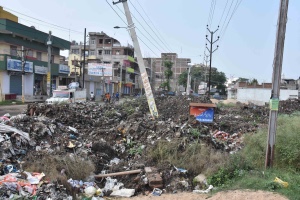 I recall the times I used to look forward to quiet Sunday afternoons. That was when I was working in a multi-national, putting in long stints that extended to the wee hours like as late as 4 a.m. Amidst this tight work schedule, Sunday afternoons were like a manna from heaven. For, I used to get up at around 11.30 a.m. and take my time with the newspapers before I settled for brunch at my favorite Irani café Koolar and Co.

One such Sunday afternoon when it was raining heavily, I had an interesting encounter with a group of foreigners who were on a visit to help under-privileged children and orphans who were under the guardianship of the Don Bosco church. A Swiss lady, by name Cristelle Hart and I struck a conversation that went on for a long time.

Those were the days when we were allowed to smoke in Cafes and there was no restriction like smoking zones or No Smoking boards. Both of us were on our third smoke when I queried her, “Are you aware of what it means to have a sandwich in time?” She replied saying, “I have no idea of what you have in mind. Kindly elaborate.”

I then gave her a demonstration with a grin on my face. Look, I have finished this cigarette. Next, I will opt for a cup of tea. Soon after I finish my tea, I will light another cigarette. In short, it’s “Cigarette-Tea-Cigarette.” Cristelle responded with her own version of a sandwich in time. “We can have a hug, smoke and a hug.”

That’s when we started conversing about her experiences in India. Cristelle narrated her experiences while interacting with street children and how they responded to acts of kindness shown by her in their otherwise rough life. “Many times, these children have to scavenge for food or live on leftovers from the garbage can. I used to treat them with sweets and Indian snacks like Samosas. At times, I used to buy them their favorite Vada Pav. I feel very happy to see their faces light up whenever they get to spend time with me.”

I then queried her about how she managed to meet her expenses. She disclosed that she was a part of the Red Cross team. “I work hard for six to eight months and save money for making trips to India and spend quality time with these children. When in India, I have a mission to work for in Kerala and live there with local support.”

As we kept chatting, it struck me that I would love to have her as my guest in my favorite Irani Café Kayanis opposite Metro Cinema in South Mumbai. We then caught a cab and proceeded to our proposed destination. I told Cristelle that this restaurant was famous for cakes. “You can get glass cakes, cheese cakes, plum cakes and other varieties. Cakes are the specialty of this joint.

However, my Swiss guest who also had an English connection on her maternal side found the cakes over sweet. It was an awkward moment that got resolved when she told me I can order a black coffee without sugar to offset the sweetness.

The quiet Sunday afternoon turned out to be a memorable evening and days later when I picked up enough courage to profess my love for her after she had left for Kerala over the email I got a thank you mail stating “I already have a boyfriend.”