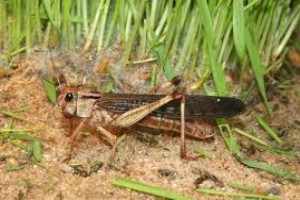 Mumbai: In the midst of a new crisis emerging in the form of locust attack on farm crops in northern and western parts of India, the Cotton Association of India (CAI) has sent a SOS to the Union Agriculture minister Narendra Singh Tomar and Union Textile Minister Smriti Irani to swiftly intervene and take precautionary measures in addition to issuing guidelines to the farming community in these states.

The CAI mentioned that 80% of cotton crop sowing has been completed in the northern states and the southern states will commence sowing in the months of June and July. In its letter to Tomar, the Association asked for urgent intervention in the states of Punjab, Haryana, Rajasthan, Madhya Pradesh, Gujarat and Maharashtra.

According to reports pouring in from the agriculture ministry’s Locust Warning Organization (LWO) the measures required to control locust swarms included spraying of insecticides in the night resting places of locusts like tree trunks.

Seasonally, the locust swarms confine themselves to the northern border of Rajasthan along with Pakistan and they arrive in the July-October season. However, this year, the locusts arrived at the Pakistan border and migrated across the state of Rajasthan including urban cities like Jaipur in the second week of April.

The early arrival of these insects which in solitude would just amount to harmless grasshoppers initiated from East Africa and their inflow to Yemen and Oman where their breeding took place uncontrolled due to the formation of large water bodies that occupied the desert space owing to cyclonic storms. The next halt for these swarm of locusts was Iran and Pakistan before they entered India through the Rajasthan border.

Locusts are known to breed exponentially and in the months from June to October during which the monsoon is active in northern and western parts of India it will take special handling to clamp down on their breeding.

KL Gurjar, Deputy Director LWO disclosed that within a short span of three months of its life cycle, an adult female locust lays 40 to 80 eggs thrice. If the breeding continues unabated it may lead to as much as 80 million locusts in an area of one square kilometre.

Union Minister Tomar said that 60 sprayers for use against Locusts have been requisitioned from the United Kingdom to combat the menace. In addition, India already is in possession of 50 sprayers. The Centre is also planning to use drones for spraying insecticides on the night resting places of locusts.

Taking stalk of the situation, Gurjar said there are four swarms in Rajasthan currently and Madhya Pradesh has two swarms of locusts. In neighbouring Maharashtra however, the numbers are small and the situation is well under control.

Citing this as the country’s worst plague in a span of three decades, the authorities said, they have been prompting adoption of measures to respond to this challenge. The current methods used to combat the locust menace include deployment of drones, tractors and cars to track and kill them. The damage assessment has spelt out that some 50,000 hectares of crops have already been destroyed by these gregarious insects.