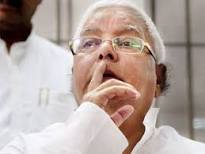 Patna: Rashtriya Janata Dal chief Lalu Prasad on Wednesday penned a poem to critice Nitish government over the “mismanagement of COVID-19 pandemic in the state.

Following is the poem:

A barren government of 15 years with no development on ground,

RJD, the main opposition party in Bihar, has largely been unable to build a public opinion against Nitish government all these years and now it is hinging its hope on the state government`s alleged mismanagement in handling the situation arising out due to outbreak of Covid-19 pandemic.

Following imprisonment of Lalu in fodder scam cases, the RJD was trying to compensate the loss by propping up his son Tejashwi Yadav. Initially, he even inspired some confidence but the complete rout of his party in the last Lok Sabha election, only diminished the hope.

Till now, Tejashwi has apparently failed to re-ignite the party and the party looks really in dilemma even as it tried to broaden its social based by appointing an influential Rajput leader Jagdanand Singh as the state party president.

Tejashwi virtually became an object of ridicule when the ruling JD(U)-BJP alliance asked him to spend 21 days at a quarantine centre as he returned to Bihar after spending nearly two months in New Delhi.

“Spend some time with the migrant workers  at a quarantine center as he was professing to champion their cause,” they remarked.

“Welcome, o bhrashtachar ke raajkumar (the prince of corruption),” mocked Information and Public Relations Department minister Neeraj Kumar. He added in the same vein:  “As you have now found it handy to end your vacation, it is time to follow the norms. You have come from outside Bihar and so you must get yourself medically screened at a quarantine centre and stay there for 21 days. At the quarantine centre, you will meet migrant workers in person and know their problems, about which you can only talk. After the quarantine period, you must get your hands dirty and devote yourself to the states fight against corona.”[the_ad_placement id=”sidebar-feed”]