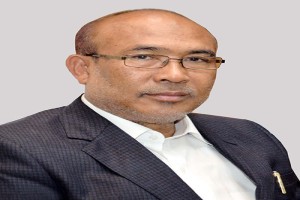 Imphal: Serious allegations of pressurization were levelled against the Manipur Chief Minister Nongthombam Biren Singh, in a narcotic related case where the accused person was subsequently granted bail. The allegation was made in an affidavit submitted to the Manipur High Court by a lady  Manipur Police Service (MPS) officer who was formerly a Superintendent of Police attached to  Narcotics and Affairs of Border Bureau (NAB), named Thounojam Brinda.

The affidavit submitted on Monday last stated that the chief minister exerted strong pressure on her to secure the release of alleged drug kingpin Lhukhosei Zhou. Zhou happens to be the former chairman of Autonomous District Council Chandel.

The affidavit was submitted by the lady police officer in response to a suo-motto criminal contempt of court case registered against the officer and her aides by the Manipur High Court. The criminal contempt notice was issued when the Court took cognizance of Brinda’s Facebook post and the spat of comments and responses it evoked. The Facebook post in question is alleged to have undermined the judiciary and cast aspersions on the Judge’s integrity over the Court’s decision to grant three-week bail to Zhou in a drug smuggling case that had been registered in 2018.

The woman police officer in her affidavit has made statements that implied nexus between high profile drug lords and top politicians. She alleged that the system that has been established in the state is looting the state and causing serious harm to the future of the youth. Further, the banner labelled “War on Drugs” was merely an eyewash intended to lend political mileage to the powers that be.

Recalling the spate of incidents that led to the contempt petition, Brinda said, “It all began with the intervening night of June 19, 2018. Zhou and seven others were arrested for allegedly being in possession of a huge quantum of narcotic drugs and unaccounted cash. Brinda was in command of the operations that was said to have commenced at 4.30 p.m. and lasted till midnight. The raids also revealed that the narcotic drugs were hidden in multiple locations inside the quarters of a ADC member at Lamphel.

It further mentioned, “Moirangthem Asnikumar, the BJP state unit Vice-President made a WhatsApp call to the lady police officer when her team was entering the quarters enquiring about the development that was taking place on ground. Brinda informed Asnikumar that she and her team were in the middle of an operation. Following this, Asnikumar insisted that she speak to the Manipur Chief Minister. The officer briefed the Chief Minister that the police were on a drug trail and had raided the quarters of an ADC member. The raid was being carried out under the suspicion that narcotic drugs were being stocked in the quarters.”

“The CM commended the team’s effort and asked to go ahead with arrests if the team found narcotic drugs stashed in the quarters. During the raid and subsequent to drugs being found in the premises, the ADC member who happened to be the chairman ADC Chandel district urged Brinda for a compromise which she refused.”

“Subsequently, the then ADC chairman Zhou sought Brinda’s permission to talk to the DGP Manipur state and Chief Minister. The lady officer again refused. On the next morning, Asnikumar visited the lady officer’s premise and informed her that Zhou happened to be a close aide of the chief minister’s wife Olice. She is furious with the arrest. He conveyed to her that she could arrest Zhou’s wife or son in exchange and have him released as per the chief minister’s communication. Brinda refused to comply stating as the drugs were not seized from Zhou’s wife or son and it was from his premises, it was not possible to accept the compromise measure.”

“Asnikumar left discontent only to return a second time conveying to Brinda that the Chief Minister and his wife were enormously displeased with her non-compliance. He conveyed that the CM was pressing for the release of the ADC without further delay. Brinda informed Asnikumar that the culpability of the said accused now rested with the ambit of the investigations and the court. She refused to budge on the issue. Brinda also pointed out that the BJP government in the state was rather young and might be faced with a difficult situation that could haunt their tenure till the end. It would not be advisable to take such an approach.”

“He came back for a third time pleading that he was only conveying the order and the chief minister and his wife were adamant about their stand that Zhou should be released. She responded saying that she did not require the job and had taken it up under instructions from New Delhi that there would be no work-related interference.”

“The SP Imphal West, Themthing also came to her premise along with Asnikumar to discuss the issue. Brinda told both that the release of Zhou was not possible. She also pointed out the perils of the chief minister being involved in such a high-profile drug-related case. On December 14, she was summoned by the SP who said, the DG had called for a meeting at around 11 a.m. The DG inquired about the status of the charge-sheet. She informed him that it has already reached the court. The DG conveyed that the CM wanted the charge-sheet on Zhou to be removed. There was still more pressure exerted on Brinda to remove the charge sheet but she did not relent. Pressure was also exerted on the investigation officer, SP NAB and Addl SP and also Special Public Prosecutor by one Advocate Chandrajit Sharma to remove the charge sheet. However, they refused to comply with the pressure tactics.”

“Then came a communication from Special Judge Yukham for NDPS Manipur on January 11, 2019 which said that the Special Public Prosecutor along with another senior officer had come to his office seeking the withdrawal of the case against Zhou. Nearly two months and odd later, on March 31, a press report appeared that there was pressure being exerted on the investigating team to withdraw the charge sheet. SP NAB Jogesh Chandra communicated to Brinda that there was an urgent bid to issue an official press communication that there was no pressure being exerted on the NAB to remove the charge sheet. Brinda refused to comply and finally the SP NAB issued the press clarification.”

“Consequently, Brinda was summoned to the CM’s bungalow along with other senior officers. She was scolded by the CM who posed “Is this the reason you receive a gallantry medal. There is something called official secrets act also.” In the interim period commencing March 16, officers of NAB had approached the Special Public Prosecutor seeking the status on the submission of charge sheet. They were informed that the matter has already reached the court.”

“This was the beginning of trouble for Brinda as the judge passed adverse remarks implying that she was threatening the witnesses. In addition, it said that she had failed to observe the court’ decorum. It also observed that there was a lack of supervision from senior officers.”

In her affidavit, she further accused the judge of misleading the high court by also stating conflicting facts in her order dated May 21, 2020. “It was about the usage of the JistiMeet App. The video conferencing was done by using Video Mobile App. Besides, the bail hearing on May 21 was done on an open court. The judge however, stated that the bail hearing was done by video conferencing by JistiMeet App. The abuse of power by the said Judge by itself amounted to contempt of court.”

“I criticized the May 21 order granting bail for three weeks to Zhou by Noutuneshweri Devi on my Facebook post. It was a fair criticism of a person holding high public office about her conduct and character. It ended with the All Manipur Judicial officers’ Association filing a complaint against her with the city’s Cyber Crime department stating she had posted an unethical comment against the Special Narcotic Drugs and Psychotropic Substances judge.”