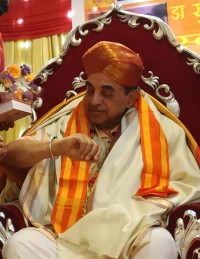 Knocked down by lock down? Learn from Dr. Subramanian Swamy. The veteran politician is perhaps the only political leader in the world to successfully conduct 60 live webinars during the lockdown period.  He appeared in “Words of Wisdom (WOW)” or “Gyan Ganga” daily, in the evening.

What was even more striking was that in the last 60 days, WoW had and estimated viewers from 110 countries and over 40 million people watched the unique awakening programme. In his daily show he held discussions with dignitaries from various fields across the globe on  culture, ancient history, and also about handling post-COVID19 era.

Dr. Swamy, well known economist and former Union Minister, is a Bharatiya Janata Party’s Rajya Sabha member. Little surprise therefore that he started his first lecture on the auspicious day of Rama Navami on April 2 at 8 pm IST and concluded the 60th episode with world renowned spiritual guru Sri Sri Ravi Shankar on May 31. After all Lord Ram and his temple in Ayodhya has always been a core issue for his party.

He also spoke on his favourite subject economics and several times on the Live show, he sought to show a mirror to the Modi-led government on India’s dwindling economic state of affairs and also how to fix it.

WoW also highlighted the plight of migrant workers from various parts of the country leaving for their villages in inhuman conditions and many times on the show he said, providing food grains and food were not enough, Ministry of Finance should give cash to the poor migrants which will empower them with purchasing power and also a demand would be created in the market.

His shows always had distinguished guests — Not just the regular faces seen on TV channels, but many others too  from as diverse fields as  Art, Culture, History , Films, Spirituality Economics & Finance, Journalism, and Medicine. Those who attended his show included Prof. Vaidyanathan from IIM-Bengaluru,  journalist J. Gopinathan, Debashish Basu, who is running an NGO and publication related to economic matters, Ratan Sharada the RSS ideologue, K K Muhammed, former director of Archaelogical Survey of India, Film actors Anupam Kher who spoke his pet subject , the plight of Kashmiri Pandits and Vivek Agnihotri, who coined the phrase “Urban Naxals”, to name a few.

Rajeev Malhotra joined from the US highlighting the need of change of school and college  curriculum which is biased towards our country and in favour of British history.  Army officer Major Gaurav Arya (Retd.), discussed need of strategy in the neighbouring region with Afghanistan and supporting Baluchistan.

The brain behind the WoW concept were  Jagdish Shetty and  Arvind Chaturvedi, both General Secretaries of Dr. Swamy’s outfit, Virat Hindustan Sangam, from Mumbai and Delhi. Ramesh Swamy, a technocrat managed the technical aspects from the US and was assisted by Ashish Shetty and Eshwar Iyer from Mumbai, Tejas Navangul from Pune, Swaminathan from Chennai and Gadigi Rakesh from Bengaluru.

“(We) thought of using this platform as many of our VHS members are tech- savvy and intelligent lots compared to other organisations, thus we thought of having this daily live chat,” Dr Swamy said. To meet the demand of the show, he had to maintain a tight schedule. Being an early riser — he gets up at 4 in the morning — did help.

During the show Dr. Swamy also recounted his association with  former Prime Ministers Morarji Desai, Choudhary Charan Singh, Chandrashekhar, Rajiv Gandhi and Narasimha Rao. In one of his shows, he also spoke about his visit to the Golden temple in Amritsar and  meeting Sant Bhindranwale, who then was portrayed as a Sikh extremist, during Indira Gandhi regime. The fiery Swamy after spending a day in the Golden temple, came out and gave a clean chit to Bhindranwale to the  waiting media personnels and added that he did not find any incriminating  material which promoted the Khalistani movement.