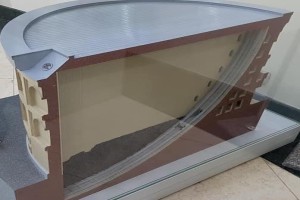 A cross section of the model of the observatory Ulugh Bek (1394-1449), a grandson of Amir Timur and Timurid Sultan who is famous in history as an astronomer and a mathematician. His observatory built in Samarkand was a 30 metre high circular structure of which only one quadrant has survived. Ulugh Bek was the son of Mirzo Shahrukh, son of Timur. Incidentally, Babur was the 5th generation in the line of Miranshah Mirzo, another son of Timur. Ulugh Bek’s calculation of the precise duration of one year was off the mark by only 1 minute and 2 seconds. His scientific activities added to medieval Samarkand’s high cultural achievements and its fame in the world. Jantar Mantar of Jaipur and Delhi have similar structures.

Also read: The postcards from Tashkent