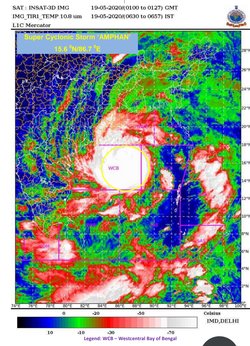 Bhadrak/Bhubaneswar: It has just begun to drizzle. The breeze is soothing. But ask the villagers of Shankarpur in Tihdi block of Bhadrak district, which was carved out of Balasore district, and they know that very soon the “soothing breeze” will turn ferocious when the super cyclone AMPHAN passes from the region. Yesterday he had come across mobile announcements being carried out to make the people aware of the cyclone.

“All in my village have gathered essentials, we are just praying that AMPHAN passes off without causing much loss. COVID has already hit poor like us, hard. However, we have to face it, there is no way we can escape,” Santosh, 32, a farmer in the village said.

“I could see the sea, an angry dark blue and white, with frothy waves jumping over each other”

Santosh’s village is roughly about 30 kilometres from port town Dhamra. He says that he has heard about thousands of people from low lying areas to have moved out to cyclone shelters. Some are in such facilities near Dhamra port town.

Even in state capital Bhubaneswar the initial hints of AMPHAN are now visible. Clouds are building up in the state capital on early Tuesday morning. Bhubaneswar is about 46.6 miles away from the coast. It is the perfect pre -cyclone setting. The sky is cloudy, wind is smooth and on the road people are scurrying back home with essential commodities as heavy rains are forecasted during the day at a time when state is already under lockdown and markets get closed before 6 in the evening. But today they are more worried because cyclone may result in complete blackout too by uprooting electric poles and damaging power stations.

India Meteorological Department forecasts light to moderate rainfall at most places of coastal Odisha with heavy rainfall at a few places over north coastal Odisha (Jagatsinghpur, Kendrapara, Jajpur, Balasore, Bhadrak and
Mayurbhanj Districts) and isolated heavy to very heavy falls over Khordha & Puri districts on  May 19 and isolated heavy rainfall over north Odisha (Bhadrak, Balasore, Mayurbhanj, Jajpur, Kendrapara and Keonjhar Districts) on May 20.

The Super Cyclonic Storm ‘AMPHAN’ (pronounced as UM-PUN)  moved  north-northeastwards with a speed of 14 kmph during past 06 hours and lay centred  over West-central Bay of Bengal about 570 km nearly south of Paradip (Odisha), 720 km south-southwest of Digha (West Bengal) and 840 km south-southwest of Khepupara(Bangladesh),  at 0230 hrs IST on Tuesday.

The cyclone is very likely to move north-north-eastwards across northwest Bay of Bengal and cross West Bengal – Bangladesh coasts between Digha (West Bengal) and Hatiya Islands (Bangladesh) close to Sundarbans during Wednesday afternoon / Evening as an Extremely Severe Cyclonic Storm with maximum sustained wind speed of 165-175 kmph gusting to 195 kmph.

The super cyclone ‘AMPHAN’ is now being continuously tracked by the Doppler Weather Radar (DWR) at Visakhapatnam (Andhra Pradesh).

*The writer is a senior Bhubaneswar-based journalist