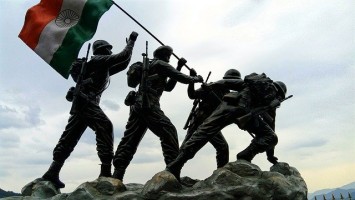 New Delhi: Prime Minister Narendra Modi has asserted that his government will not allow any unilateral change of the  Line of Actual Control (LAC).

Giving account of the events of June 15 at Galwan that led to the loss of lives of 20 Indian military personnel, Prime Minister Narendra Modi told the All Party Meeting that Chinese forces had come in much larger strength to the LAC and that the Indian response was commensurate. “The violence arose because the Chinese side was seeking to erect structures just across the LAC and refused to desist from such actions,” the Prime Minister said.

Modi reiterated that India would respond firmly to any attempts to transgress the LAC. He specifically emphasized that in contrast to the past neglect of such challenges, Indian forces now decisively counter any violations of LAC (“unhe rokte hain, unhe tokte hain”).

While recalling the sacrifices of the soldiers of the 16 Bihar Regiment that foiled the attempt of the Chinese side to erect structures and also cleared the attempted transgression at this point of the LAC on that day, the Prime Minister paid glowing tributes to the valour and patriotism of the armed forces who repulsed the designs of the Chinese there. “Those who tried to transgress our land were taught a befitting lesson by our brave sons of soil,” he said and said emphatically: “I want to assure you, that our armed forces will leave no stone unturned to protect our borders”.

What is Indian territory is clear from the map of India, Modi said and added that his government was strongly and resolutely committed to that.

In so far as there was some illegal occupation, the All Party Meeting was briefed in detail how over the last 60 years, more than 43,000 sq.km had been yielded under circumstances “with which this country is well aware”.

Prime Minister underscored that India wants peace and friendship, but upholding sovereignty was foremost. He pointed out that  the government had given primacy to development of border area infrastructure  to make our borders more secure. “Provision has also been made for fighter planes, modern helicopters, missile defence systems and other such needs of our forces,” he said, adding that through the recently developed infrastructure, patrolling capacity at LAC had also increased,. “Through this, we are better informed about the developments at LAC and consequently are able to monitor and respond better. The movement of those which used to take place without any disruption earlier is now checked by our jawans, which at times leads to build up of tension,” he said. He noted that through better infrastructure, supply of material and essentials to jawans in the difficult terrain had become comparatively easier.

Congress Party president Sonia Gandhi, however, told the All Party Meeting that the leaders were still in the dark about the details and questioned the government about intelligence reports and other related matters. Nationalist Congress Party supremo Sharad Pawar stressed that issues of whether soldiers carried arms or not were decided by international agreements and the parties needed to respect sensitivities involved in such matters. Meghalaya Chief Minister and National People’s Party  presidentConrad Sangma said that the Prime Minister has been working on infrastructure in the Northeast and that must go on. Another prominent Opposition leader  of Trinamool Congress and West Bengal Chief Minister Mamata Bannerjee, as well as Dravida Munnetra Kazhagam (DMK)  leader and Tamil Nadu Chief Minister  MK Stalin and Maharasthra Chief Minister Uddhav Thackeray (Shiv Sena) expressed solidarity with the government. While Bahujan Samaj Party’s Mayawati said this was not the time for politics and she firmly stood with the Prime Minister on whatever decisions he takes, Janata Dal United President and Bihar Chief Minister Nitish Kumar said that there should be no difference amongst the leaders and parties should not allow any disunity which can be exploited by other nations.