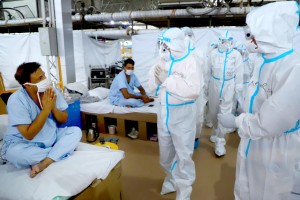 New Delhi: The World Health Organisation (WHO) in its Guidance Note on “Public Health Criteria to Adjust Public Health and Social Measures in the Context of COVID-19” has advised comprehensive surveillance for suspected cases. While explaining the concept of comprehensive surveillance and testing of suspect cases, WHO advises that a country needs 140 tests per day per million population.

In response to the WHO Guidance Note, the Union Ministry of Health and Family Welfare stated on Wednesday that with the various coordinated efforts made by the Centre and the States/UTs, 22 States/UTs in India were already conducting 140 and more tests per day per million. “States/UTs are being regularly advised to increase the testing capacity to match the WHO advised levels of testing,” it stated.

One of the factors strongly aiding the increasing numbers of COVID-19 tests in the country is the steadily growing network of labs for testing of COVID-19, the ministry claimed, adding that the total number of testing labs rose from just one lab in Jan 2020 to 1223 as on date,,  with 865 labs in the government sector and 358 private labs. In addition to the gold standard for test, RT PCR, TrueNat and CBNAAT were also used to augment this facility, it said.

The Ministry further provided the following figures in support of its claims:

0
0
Tags: (WHO) Guidance Note on “Public Health Criteria to Adjust Public Health and Social Measures in the Context of COVID-19” India conducting 140 and more tests per day per million Union Ministry of Health and Family Welfare WHO World Health Organisation