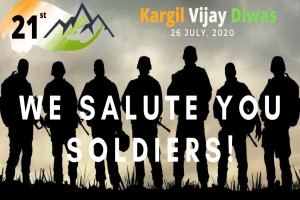 New Delhi: As the country celebrates the Kargil Vijay Diwas – the day when 21 years ago Indian  Army unfurled the flag of victory in the battle of Kargil, Prime Minister Narendra Modi said India can never forget the circumstances under which the battle of Kargil took place – “Pakistan had embarked upon this misadventure, nursing delusions of encroaching upon Indian soil, to distract attention from the internal strife prevailing there. India was then in the process of making efforts to foster good relations with Pakistan. “

In the 14th episode of his Mann Ki Baat radio broadcast on Sunday, he recited a doha (couplet) from Tulsidas’ Ramcharitmanas – बयरु अकारन सब काहू सों। जो कर हित अनहित ताहू सों ।।” , which means, to the wicked, enmity with one and all for no reason comes naturally. “People with such a disposition keep thinking of harming even their well-wishers… that is why when India extended a hand of friendship, Pakistan tried to respond, stabbing in the back,” he said, and added: “But after that, when our gallant Army displayed deeds of valour, when India demonstrated her might the whole world watched it. You can imagine….the enemy lodged in soaring mountainous heights and our armed forces, our brave soldiers fighting from down below! But it was not about victoriously conquering the heights…”

It was the victory of high morale and bravery of our armed forces in the truest sense of the term. The then Prime Minister Atal Behari Vajpayee had said from Red Fort during the Kargil war : “All of us remember that Gandhi ji had given us a Mantra. He had said that in the face of any dilemma in order to decide what to do, you should think of the poorest and the most helpless person of India; ask yourself whether your deed will result in benefiting that particular person. Kargil has given us another Mantra- And the Mantra was – before taking any important decision, we should think whether our step, our endeavor is befitting to the honour of the soldier who laid down his life in those remote mountains.”

Modi said what Vajpayee had said then was relevant even today: “… in times of war, whatever we say or do has immense bearing on the morale of the soldier, ever vigilant at the border, as well as the morale of his family. We should never forget this… and that is why our conduct, our demeanour, our speech, our statements, our limits, our aims… whatever we do and say, must distinctly be conducive to enhancing the morale & honour of our soldiers. Countrymen bound by a thread of unity, with the Mantra that the Nation is above everything else bolster the strength of our soldiers much more than thousand fold. We are aware of the dictum ‘Sanghe Shakti, Kalau Yuge’; the essence of which tells us that there is strength in unity in the present era.”

Prime Minister in his address said that at the point of Kargil war,  he too had got an opportunity to go to Kargil,  and witness the gallantry of Indian soldiers. “That day is one of the most precious  moments of my life. I am noticing, today, people are reminiscing the Kargil Victory, throughout the country. On social media, they are saluting their braveheart heroes and paying tributes to those martyred with the #Courage in Kargil. Today, I, on behalf of all countrymen salute the brave soldiers….and along with them I also salute the brave mothers who gave rise to the real heroes, sons of Mother India.”

Modi called upon the youth of the country to share stories of the heroic deeds of the brave hearts and sacrifices on part of the brave mothers, throughout the day. He also urged them to visit, the website www.gallantryawards.gov.in where information was made available on the brave warriors and tales of their valour. “And when you discuss these with your friends, they will become a source of inspiration. You must certainly visit this website… in fact, I would like to insist on multiple visits,”  he said.

He also cautioned against posting certain things on Social Media at times that are “detrimental to the country”. “There are times when we keep forwarding things out of sheer curiosity. Despite knowing that it is wrong, we keep doing it. These days, battles are fought not just on borders; they are fought within the country too, on many fronts simultaneously. And every countryman has to decide his or her role in that. We too should determine our roles, fully bearing in mind soldiers fighting on the borders under the harshest conditions,” he said.