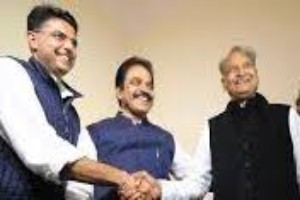 Jaipur: Amidst a slew of views and counterpoints that keep emerging over the constitutional crisis that is being faced by the Congress government in Rajasthan, there emerges a pattern which precipitates the idea that it is a contest between two sets of dynasts to wrest power in the state.

Congressmen who were sympathetic to the rebel Sachin Pilot camp disclosed that speculation was rife on whether Chief Minister Ashok Gehlot was planning to eliminate Pilot from the Congress camp and pave way for his son Vaibhav to take over after the 2023 state elections. The pro-Gehlot camp however, were speculating that Sachin Pilot, son of late Rajesh Pilot might become the chief minister with external support from the BJP. However, neither camps wanted to come on record about the views they aired.

It may be recalled that soon after the Rajasthan High Court pronounced a status quo to prevail till July 27 in which the Center will also become a party to decide whether the anti-defection clause was applicable in the current imbroglio, Gehlot sought to meet the Governor and establish his show of strength with numbers.

It may be mentioned that the Rajasthan High Court further extended the reprieve it had provided to Sachin Pilot’s rebel camp to July 27 following its decision to accept Pilot’s last-minute request to make the government at the Centre a party to the case. This will provide an avenue for the Pilot camp to avail of the Centre’s stand on whether the anti-defection law is applicable in this specific instance.

The HC’s decision to keep the status quo prevalent has prompted Chief Minister Gehlot to seek an urgent meeting with Rajasthan Governor Kalraj Mishra. The Chief Minister is expected to take the full strength of the Congress MLAs under his wing to the Governor for showing the Party ‘s strength. Soon after the meet, he is slated to call for an assembly session.

Earlier, in the meeting he held with the Governor hours after the Supreme Court ruled in favour of Pilot’s camp on Thursday, Gehlot had reportedly informed the governor, “We have a majority.” Meanwhile, the Rajasthan police’s Special Operation Group (SOG)” has been put on full swing to investigate the “horse-trading of MLAs” allegation under Gehlot’s instruction. At the time of going to press, the SOG was still trying to track down the two rebel MLA’s who switched allegiance to Pilot.

Later in the day on Friday, the Congress Party which feels stressed out because of the Court verdict continuing to grant reprieve to the rebel camp, chalked out a plan to take their agitation to the streets. The Party will go all out holding demonstrations in each of the district headquarters tomorrow. The demonstrations will serve to communicate to the people of the state that the BJP is conspiring to kill the mandate of the people and murder democracy. The pro-Gehlot camp that plans to go hammer and tongs on the rebel camp headed by Sachin Pilot, is being spearheaded by Rajasthan Pradesh Congress Committee Govind Singh Dotasra.

Switching to the point of view from the rebel camp, Sachin himself had gone on record that he had no plans to join the BJP at any point of time and his camp was only seeking a change in leadership. The situation became open for warring interpretations. The Supreme Court on one hand contended that dissent cannot be suppressed in a democracy and an assembly speaker should remain neutral in such situations, advocate Kapil Sibal stressed on the authority of the speaker to issue disqualification notices.

Others in the Pilot camp provided a conflicting point of view which said, “Gehlot’s son Vaibhav who had lost the Lok Sabha elections from the Jodhpur constituency was being groomed to take over as the next chief minister. However, in order to implement the scheme, the Congress leadership would want Sachin Pilot out of the way. It’s already known in Rajasthan political circles that Gehlot who will turn 73 by the 2023 elections is almost certain to be succeeded by Pilot.”

Currently, the situation on ground is very uncertain. With conflicting conspiracy theories doing the rounds and both camps levelling allegations against the other, the first goal post for both sides would be the Rajasthan High Court’s verdict that will be pronounced on Monday. The conspiracy theories get thicker as the ruling BJP at the Centre shares a notorious reputation for toppling duly elected governments by engineering splits to form a saffron alliance. Karnataka and Madhya Pradesh are the two states that have witnessed this usurping of power.