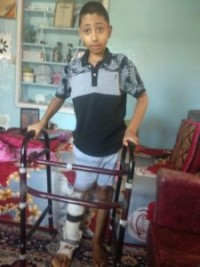 Srinagar: Bed-ridden for almost a year now after a near-fatal accident, 11-year-old Ayaan Zaffar – a specially abled child with low vision – had been waiting for justice but in vain.  Ayaan’s parents were depressed and were running from pillar to post for help while their child was bed-ridden, unable to walk without support.

On the fateful day, June 19, 2019, Ayaan, who is fifty per cent visually impaired,  was hit by a speeding school bus of his own school right within the premises of his school. Now he has also become locomotor disabled.

When Ayaan met with accident the school authorities took him to a nearby hospital and thereafter when they informed his parents, they withheld many crucial information. Hence no police case could be filed and even the hospital in question admitted him without involving the police lest it would have become a medical-legal case.

Just before the accident happened, Ayaan was walking from one department to another to collect his Urdu notebook and his teacher was following him. “My teacher told me to walk and that he was behind me,” Ayaan said. When he reached the zebra crossing within the school compound at around 11.30 am, suddenly the speeding bus hit the partially blind boy.

For the hapless parents — Dr. Zafar ul Rehman, himself a dental surgeon, and Shaista — they had to forego the issue as they had to find means to save Ayaan, whose condition was worsening. Besides, the school management had assured them that the school would bear all expenses of his treatment and would also sponsor the boy’s education till Class 12. But these turned out to be empty promises, as the parents soon found out. They had made rounds of big hospitals in Mumbai and Chennai and soon found themselves in deep financial trouble. Their hopes were dashed when the school management refused to entertain their emails, despite its promise.

“My son was only partially visually impaired. But the negligence of the school and his teacher has also made him wheelchair-bound. He has become dependent. We want justice for him, to save our child’s future and enable him live his life with dignity,” Ayaan’s mother, Shaista, said. All through, the parents had lamented that neither journalists nor social activists ever raised their voice in their support. “We were very much disappointed with our social activists, child right activists, journalists, and newspapers.  No one came forward to take up the issue of our specially-abled child who was bedridden for last almost a year,” Dr. Rehman said.

But as they say, God is the Saviour and He helps those who help themselves. Ayaan’s parents left no stone unturned not just for the treatment of their child, but also to ensure that he got justice.

“We had lost all hopes but then we came across people like Dr Chintanjeet Sarna, a child right activist in Kashmir who has been working for special kids, Mudasir Shaban, a social activist who himself is a person with disabilities, Zaheer Jan, a paeadreatic therapist and disability right activist, and Noor ul Azhar Shah. These people are now trying their best and raising this issue for the cause of our son. It is a fight for the rights of our specially-abled son so that he can live with dignity. Our fight is to ensure that in future no child faces meet such a fate in schools,” Dr. Rehman said. He said some social activists from different parts of the country, such as Ruby Singh from Bengaluru, Pankaj Maru from Madhya Pradesh and Bujiur from Mumbai, too have taken up the issue and are guiding the parents in their fight for justice.

These activists have now approached the Ministry of Social Justice and Empowerment, and also formally registered a case in the court of the Chief Commissioner for Persons with Disabilities in New Delhi, who after admitting the petition, has asked the Director General of Police to verify the case and check with the school regarding compensation and future education of Ayaan.

Explaining the position, Dr. Sarna said in such cases, parents do have rights to approach social workers or move to court to get justice. “As a social worker we need to come forward and help them,” he added. He mentioned that like any other child, Ayaan has rights like right to education, right to be safe , right to be cared and raised well, and right to survival. “We all must fight for his rights,” he added.  Zaheer Jan pointed out that according to Rights of Persons with Disabilities (RPWD) Act, 2016, ensures special-need children have these rights. He further added: “The Constitution secures to the citizens including the disabled, the right to justice, liberty of thought, expression, belief, faith and worship, equality of status and of opportunity and for the promotion of fraternity. After  the abrogation of Article 370 , these laws are applicable in Jammu and Kashmir also.”

He added that  inclusive education is one of the important provision in RPWD Act 2016. Under the Constitution the specially abled have been guaranteed the following fundamental rights.”We hope the school will help the child with fair compensation and sponsor his education,” Jan said.