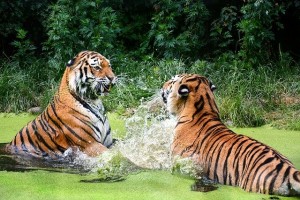 Tigers, the top predators in an ecosystem, are vital in regulating and perpetuating ecological processes. Ensuring the conservation of this top carnivore guarantees the well-being of forested ecosystems, the biodiversity they represent as well as water and climate security. However, the rise in organized poaching driven by an international demand for tiger parts and products, depletion of tiger prey and habitat loss have led to largely disconnected fragmented populations. Extant tiger populations are confined to less than 7% of their historical range in patchily distributed habitats across a range of 12 regional tiger conservation landscapes (TCLs) in southern, northern, and south-eastern Asia. Of these, six global priority TCLs for long-term tiger conservation significance are present in the Indian subcontinent alone. Home to more than 80% of the global population of 3,159 adult free-ranging tigers, India plays a crucial role in accomplishing the objectives of the Global Tiger Recovery Plan that was ratified at the meeting of world leaders held at St. Petersburg (Russia) in 2010.

Lions and tigers were traditionally tracked by professional shikaris (hunters) from their pugmarks for shikar (hunting). After the first lion census, based on pugmark count, by Wynter-Blyth and Dharmakumarsinh (1950), Saroj Raj Choudhury, a forest officer from Odisha modified the approach for counting tigers. Subsequently, several forest officials advocated and improvised on the pugmark method for tiger census . Karanth et al. (2003) brought out several deficiencies of the pugmark census in light of modern science dealing with animal abundance estimation. But it was only after the Sariska debacle in 2004-05 (and subsequently in Panna in 2007-08), where despite total local extinction of tigers due to poaching, official records showed presence of substantial tigers based on the pugmark census.

This disaster and its extensive media coverage prompted the Prime Minister of India to appoint the Tiger Task Force (TTF) with a mandate to develop a strategy for tiger conservation in India. Besides recommending the creation of the National Tiger Conservation Authority (NTCA), and amendment of the Wildlife (Protection) Act 1972, the TTF also suggested a country wide monitoring of tigers and their ecosystems based on modern scientific protocols developed by the Wildlife Institute of India in collaboration with Project Tiger Directorate and Madhya Pradesh Forest Department.

NTCA in collaboration with the State Forest Departments, Conservation NGO’s and coordinated by the Wildlife Institute of India (WII), has conducted a National assessment for the “Status of Tigers, Co-predators, Prey and their Habitat” every four years since then. The first status assessment of 2006 was peer reviewed by international carnivore experts and the IUCN.

The methodology (vide Methodology Chapter of the current report for more detail) used for these 2 assessments was standardized after a pilot survey conducted in about 20,000 km area of Satpura-Maikal landscape of Central India. The parameters used to assess the Indian tiger population status are abundance, i.e., the number of individuals in a population occupying the same space at the same time, and density i.e. abundance scaled by area and spatial distribution.

The first countrywide assessment was done in 2006 and it estimated India’s tiger population to be 1,411 (SE range 1,165 to 1,675). Before this scientifically objective assessment, the official tiger number in India was estimated at 3,500 tigers. The 2006 assessment was spatially explicit and determined the extent and size of individual tiger populations and the status of habitat connectivity between these populations for the first time at a national scale. During the 2006 exercise the Sundarban landscape was not assessed, as at that time, the protocol for sampling this hostile and unique tiger habitat had not been developed.

The fourth cycle of the assessment was undertaken in 2018 and 2019. In this cycle, recording of primary field data digitally, through mobile phone application M-STrIPES (Monitoring system for tigers – intensive protection and ecological status), that uses GPS to geotag photo-evidences and survey information, was done. Further, it involved the development of innovative technology like automated segregation of camera trap photographs to species using artificial intelligence and neural network models (software CaTRATCamera Trap data Repository and Analysis Tool). Program ExtractCompare  that fingerprints tigers from their stripe patterns was used to count the number of individual tigers.

Like the previous cycles, this time also the country was divided in five tiger occupied landscape complexes having unique geographical features and tiger populations: