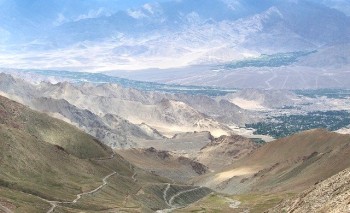 Shimla: Himachal Governor Bandaru Dattatraya has suggested precautionary measures related to the border areas of Lahaul-Spiti and Kinnaur districts of Himachal Pradesh which share boundaries with China to the Union Government. His office informed on Monday that the Governor had written a letter to Union Defence Minister Rajnath Singh in this regard. In the letter he said that this region was strategically important as it was adjacent to China and amidst the tension between China and India, needed more attention.

While pointing out that Himachal shared more than 260 km boundary with Tibet and China, he said that therefore, “we need to be suitably prepared for any eventuality”. Stressing that the modes of communication and road transport in these remote border areas of the State should be strengthened, he said that presently, only one Independent Brigade of the Indian Army was deployed at Pooh. Dattatray further suggested that in future the deployment of the Indian Army may be increased to an Independent Mountain Division. He said that adequate arrangements may be made to tackle drones from China as and when required.

Dattatraya also stressed on an “urgent need” of an airstrip in the Spiti area of Lahaul and Spiti District for prompt deployment of forces in the border areas in case of need and this airstrip would act as advanced landing ground. He added that Himachal Pradesh Police was trying its best and District Superintendent of Police of Kinnaur and Lahaul & Spiti had visited villages in the border areas and interacted with the people to build their confidence and ensure their safety. “However, similar continuous efforts need to be undertaken by the Central Intelligence Agencies, Indian Army and ITBP to instil sense of security and confidence among the people living in the border areas,” he added.

The Governor said that Atal Tunnel under Rohtang pass, connecting Manali in Kullu District with Keylong in Lahaul & Spiti District was likely to be completed in the near future. The commissioning of the tunnel would allow year round traffic on the Manali-Leh axis, thereby significantly increasing road traffic, he said. He said that on account of its strategic importance, adequate arrangements for intelligence, security and maintenance of this axis round the year need to be made in advance.

He hoped that these suggestions once implemented would strengthen India’s position on the Indo-Tibet/China border and would also generate confidence amongst local people.