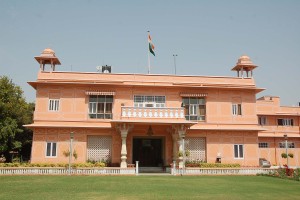 Jaipur: Chief Minister Ashok Gehlot is readying his team of Congress legislators to camp at Rashtrapati Bhavan, the official residence of the President and if required protest outside Prime Minister Narendra Modi’s house to ensure that the “BJP conspiracy” does not topple the Rajasthan state government.

A senior spokesperson for the Gehlot-led Congress government on Saturday seconded the Chief Minister’s proposal, stating, “If things get bad, we will hold a dharna outside the PM’s house.” The Gehlot camp announced its intentions just before the Rajasthan CM was about to meet the Governor Kalraj Mishra and request for an assembly session at the earliest. The Chief Minister was making a second time pitch for the floor test to the Governor.

The Rajasthan Chief Minister alleged that the Governor was under pressure from the top to stall the decision on convening a session of the House. At the time of going to press, Gehlot voiced his anxiety about ensuring that his government got a chance to prove its majority by holding a session on Monday.

Terming the sit-in dharna at Raj Bhavan a “wrong trend,” the Governor Kalraj Mishra in a written communication stated, “You have made a public statement to the effect if Raj Bhawan is gheraoed, you can’t be held responsible for that. It reflects badly as if the state government and its home ministry cannot ensure the safety of the Governor just imagine what the law and order situation will be in the state.”

The Congress legislative team subsequently called off the protest after the Governor assured them that an assembly session will be called, post the receipt of clarifications from the state cabinet on some points.