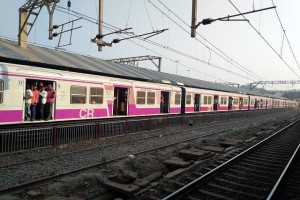 Umpiring over Indian politics on a local train

It used to happen usually in train journeys on Mumbai locals or when seated in a crowded tea stall munching snacks bought from the neighbouring farsan shop. People used to take sides, one camp supporting and defending Congress and the other camp deifying their BJP heroes. Silent observers like me were treated as umpires to mediate between the two warring camps.

On one such occasion, the saffron supporter threw up a challenge. “For the next twenty years there will be no challenge for the strong-man led BJP government at the Centre.” This occurred after the BJP had gained power at the Centre for the second successive term with an overwhelming 302 seats. A die-hard Congress backer seated next to me pounced on the statement. “You don’t always go by numbers. Our Party is getting stronger and in the next election we will show you your right place.”

The person sitting next to him said, “As long as the Congress leadership does not change, they don’t stand a chance in the general elections for the next terms.” The conversation got more animated as one of them said, “Is there any chance of the combined opposition toppling the BJP in the forthcoming polls?” It was a clear pitch for me to intervene and moderate.

“I don’t think that should be all that difficult. If you look at it closely, you will find the solution rather easy and as I would vouch, simplicity lies on the far side of complexity.” The saffron enthusiast taunted, “Congress will no more be able to operate with money power. They are a dwindling lot and people are no more enamoured with the Dynasts. It’s time for the Dynasts to bow out and make way for fresh faces.”

I responded, “I agree with your point of view. However, I still insist the solution for this challenge is very simple and needs no money bags or freebies.” “Don’t take our leader so lightly. He is a very street smart and astute politician. No one in this country has the wits to take on our leader,” screamed the saffron baiter.

“Well, it’s a brain-teaser. I give you one more chance to figure out how this can be done without any financial or muscle power at play,” I said replying to his jibe. “You sound like a mad man. Our leader is very popular with the masses. His popularity keeps increasing with every election meeting he holds. There is no other solution for the country as he is the only strong leader our nation has. I don’t think there is any alternative in the near future. If you still think, there is an alternate solution, kindly spill the beans.”

I looked at the Congress enthusiast and smilingly posed, “Can you take a guess at what I am suggesting to defeat the BJP at the next hustings? I want you to think objectively and come up with a logical deduction rather than heaping platitudes on the Party you are supporting?” The Congress fan spoke confidently, “There will be a heavy anti-incumbency factor and our Party has enough time to recoup and show solidarity on the national front.”

“You have got it wrong. I don’t see anything happening on those lines.” There was a brief silence with everyone looking at me as if to say, “What on earth are you implying?” I paused and giving them a knowing smile, I gave the repartee. “You just have to make a blue-blooded Congressman the BJP president. Rest of it will happen in auto-mode.”

3 thoughts on “Gossiping Around: A political brain teaser”