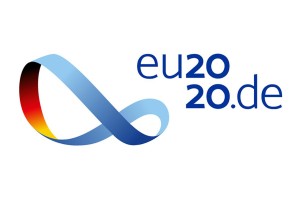 Logo of the German presidency of the EU Council

Brussels: Germany takes on the six-month presidency of the Council of the European Union on Wednesday July 1 at a time when Europe struggles to recover from the coronavirus pandemic. It recognises  COVID-19 is a significant challenge and its immediate management and recovery are at the heart of the German programme for the presidency. It hopes a smooth consensus on the recovery fund and the EU’s budget 2021-2027.

In the past six months, Croatia had held the EU Council Presidency for the first time since its accession in 2013. Croatia took a key role as crisis manager: besides the enormous challenges due to the COVID-19 pandemic, Croatia was hit by a severe earthquake. Now minister Grlić Radman officially hands over the Council Presidency to Germany. After a symbolic handover in front of the Brandenburg Gate, both foreign affairs ministers were scheduled to have  a political exchange in the Foreign Office.

German priorities for the presidency

During its presidency, Germany would work towards climate protection through the European Green Deal, which is a roadmap for making the EU’s economy sustainable so that Europe became a climate-neutral continent by 2050. It may be mentioned that in November 2019, the European Parliament declared had a climate emergency asking the European Commission to adapt all its proposals in line with a 1.5 °C target for limiting global warming and ensure that greenhouse gases emissions were significantly reduced. In response, the Commission had unveiled the European Green Deal.

Germany would also work towards economic and social digitalisation as Europe aims at becoming digital single market. Africa and relations with China would also be the focus areas and the presidency would  would also work in the direction of Europe taking more global responsibility to strengthen its role in the world. Another priority will be future EU-UK-relations after the UK left  the EU. Talks were still going on to find out ways for cooperation between the two on  anything from trade to transport and the fight against crime.