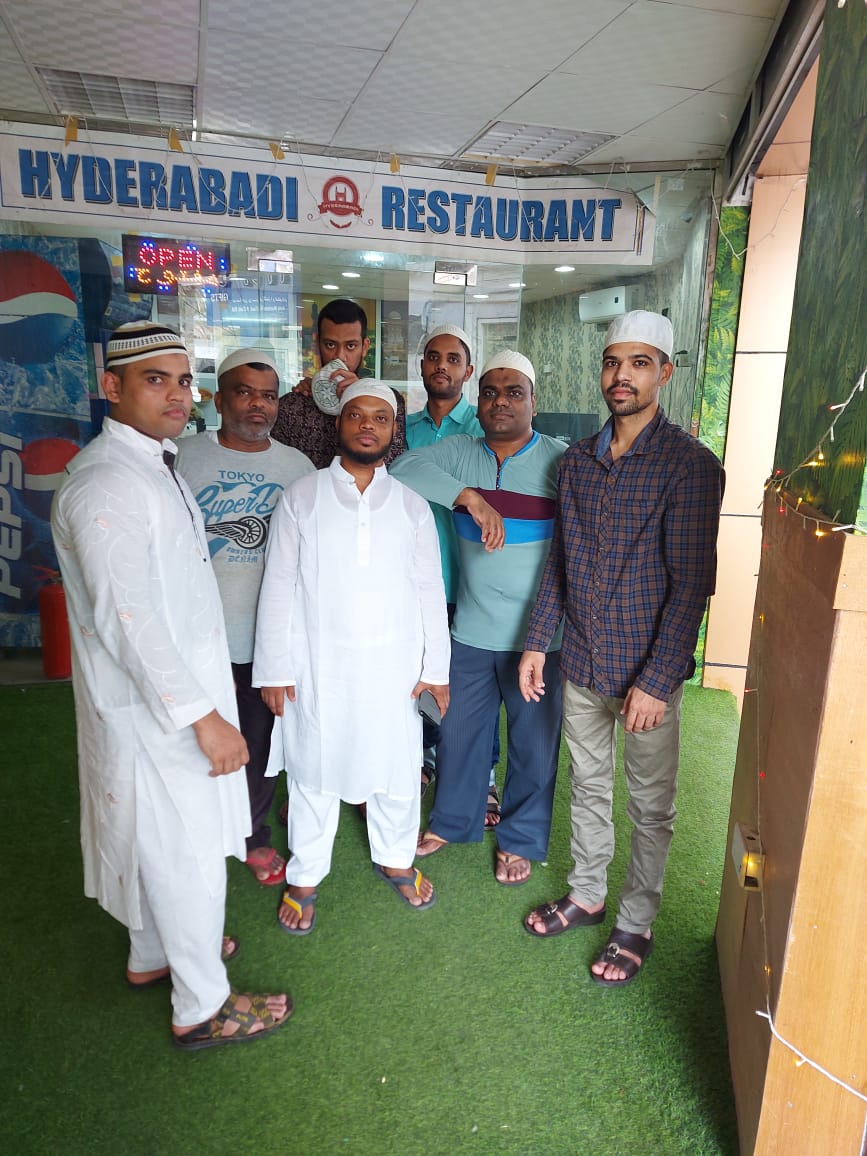 Syed Ahmed Raheem with his team outside his hotel in Mutrah. Photo: VInod Raghavan Muscat: Eid was celebrated on May 23 in Muscat. This was a day before it was celebrated in India. For Indian expats working in the Sultanate of Oman the celebrations were subdued as they, like in India, remained confined to the four walls of their rooms, filled with emotions and flashback memories of their near and dear ones. Yet the experience was unique in many ways.

Speaking on phone to some of the expats from different parts of India, most of them not only missed their family but also realised how important was freedom than any other things, during the ongoing lockdown over two months in Oman to fight against Corona virus pandemic.

Mohammed Rayees, working as Assistant Manager in a semi-government compnay, residing in a sharing accommodation for the last 30 years, revealed “I woke up early in the morning, wore the best clothes I have, offered Eid prayer at home, which was first experience in my life.”

He further said, “I read Takbeer, since my childhood I have been performing.” After that as I was hungry, I went to kitchen and had my favourite breakfast – noodles with two boiled eggs.”

“I wished my family and friends back home in India by Whatsapp and my roommate’s family, who supported me by arranging Iftaar and Saher  during the Holy month of Ramadan. In the afternoon had lunch with them. They served delicious biryani with Sheer kurma.

Mohammed Zameer, hailing from Uttar Pradesh, was a happy man, as he celebrated Eid with his family. He felt bad as he could not visit the nearby Mosque to offer Eid prayer. His two little daughters did wear the best clothes for the Eid. Zameer has been in Oman for the last over 15 years.

It was a different Eid for Syed Ahmed Raheem too, the supervising chef in a Hyderabadi hotel in Mutrah. (Mutrah is the most affected area in the Muscat governorate with over 3,000 corona positive cases reported. Oman has crossed 6,500 positive cases). Heading a team of eight staff members of the hotel,

two of them had just come a few months before the pandemic broke, he has maintained his cool and kept his head high in good spirit.

It was the first Eid for Moosa and Najeeb in Muscat. Obviously both wore dejected looks and were homesick. However, Raheem played a perfect role of a team captain and took care of them by arranging food during the entire Ramadan month, in spite of shortage of money and rations. They were lucky though that they got rations from the Indian Embassy and the local volunteers helped them with food for the Roza Iftaar.

But there were some like Kamal Ahmed, who were luckier than others. Kamal had left before the lockdown to his brother’s place in Mabellah (50 kms. from Muscat), and celebrated Eid with his brother.