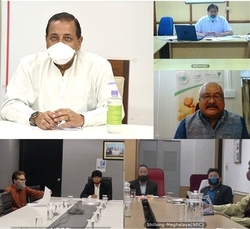 Minister of State Dr. Jetendra Singh at a review meeting through video conference with senior officers from North Eastern Council on Monday

New Delhi: Five out of eight Northeast States are Corona free while the other three States have not added any new Corona positive case in the last few days,  Union Minister of State (Independent Charge) for Development of North Eastern Region, Dr Jitendra Singh, claimed here on Monday.

Dr. Singh informed that the five  North Eastern states that were totally Corona free were Sikkim, Nagaland, Arunachal Pradesh, Manipur and Tripura. The three other states of Assam, Meghalaya and Mizoram had 8, 11 and 1 Corona positive cases respectively, “which are waiting to become negative, while no new cases were added till Sunday night”, he said.

Briefing the media, Dr Singh expressed satisfaction that  in the wake of the present COVID crisis, the Northeast region  has emerged as a model of “effective, diligent and disciplined health management”.

The minister also informed about the proposals received and under consideration from different North Eastern States like Mizoram, Meghalaya, Arunachal Pradesh and Manipur for new health related projects devoted to management of infections and Corona care, critical care and upgraded healthcare. These projects will be dealt with priority, he said. In addition, he informed that the Ministry of DoNER had placed Rs 25 crore at the disposal of North Eastern States in the initial stage itself, much before the lockdown, as gap-funding for corona related activities.[the_ad_placement id=”sidebar-feed”]