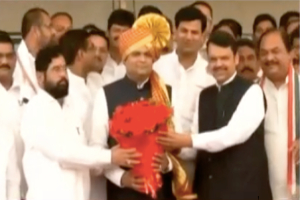 Mumbai: Chief Minister and Shiv Sena rebel Eknath Shinde, won his floor test with a robust 164 votes in the 288-member Maharashtra Assembly. The floor test was conducted by using EVMs.

Earlier yesterday, a day after the swearing-in of Eknath Shinde as the Chief Minister of Maharashtra, the Assembly voted in favour of BJP MLA Rahul Narvekar as the Speaker. Narvekar who happens to be a first-time MLA, on a BJP ticket, polled 164 votes against the Maha Vikas Aghadi (MVA) allies candidate’s 107 votes.

Sena chief whip Sunil Prabhu stated that those Sena MLAs who have defied the Party’s diktat during the elections for the Speaker’s post will face disciplinary action and the issue has already been reported to the presiding officer for the polls.

Uddhav, the ousted chief minister, raised his voice alleging unconstitutional conduct on part of the Bharatiya Janata Party that served to instigate dissent within the Shiv Sena’s legislative ranks to overthrow a government elected by the due process of law. Thackeray also sought legal opinion from Constitutional experts.

Speaking at Sena Bhavan to a group of Sena district presidents, Uddhav castigated the BJP, stating that they had insulted the constitution by staging this coup and are conspiring to destroy the Sena completely. The former Chief Minister also challenged the BJP to declare mid-term polls in the State, adding his Party was willing to put up a fight and respect the mandate of the people. “Let the people judge us for our performance. We submit ourselves to the people’s court,” he added.

In seeking legal opinion, Uddhav wanted to ascertain whether what transpired subsequent to the rebellion within his legislative Party was in violation of the constitutional norms or say ultra vires the constitution. He also exhorted all the district presidents to stick together and put up a fight to combat the BJP’s designs to destroy the Party in Maharashtra. He also asserted that if the BJP was willing to seek a fresh mandate from the people of Maharashtra, he was sure that they would be sent packing by the people of the state.

It may be recalled that following the collapse of the Maha Vikas Aghadi (MVA) government, Shinde was sworn in as Chief Minister and BJP’s Devendra Fadnavis as Deputy Chief Minister on June 30, 2022. This was a sequel to Shinde launching a rebellion within the Sena’s legislative ranks and garnering support from a majority of the Sena MLAs, thus precipitating a political crisis in the state.

Meanwhile Shiv Sena spokesperson and MP Sanjay Raut predicted that this new alliance will not last for long and is likely to break up anytime soon. Raut also taunted the rebel team of Sainiks for availing extraordinary security cover. He said, “Even Ajmal Kasab did not have this kind of security. Why on earth do these rebels exhibit so much fear?”

Later, Raut also dwelt on the identity of the rebel group headed by Shinde, stating they cannot have any claims of being the original Shiv Sena. He also spoke about the Sena visiting the grassroots in various parts of Maharashtra to rebuild and strengthen the party ranks.