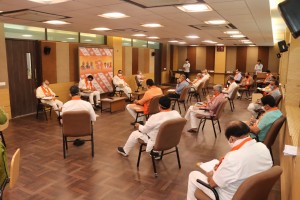 Ahmedabad: Both the BJP and the Congress in Gujarat are in turmoil facing threats of rift from within after the recent change of guards which sections of cadres in the two arch rival parties have not taken kindly. The scales of the protests, however, are different, subdued in the BJP and not so suppressed in the Congress though the murmur has not yet become loud noise.

The dissatisfaction in the BJP over the appointment of CR Paatil, a member of the Lok Sabha from Navsari in south Gujarat, as the state unit president replacing Jitu Vaghani, has expectedly remained subdued not because he has been received with open arms by all sections in the party but because none dared openly voice objections against the personal choice of the prime minister Narendra Modi. But the case in the Congress is not so hush-hush, several old guards have publicly criticized the sudden elevation as the working president of the state Congress of the 27-year old hitherto unknown youth leader Hardik Patel who rose to prominence by leading the agitation for reservation benefits for the “Patels” from 2015 and partially succeeded as the state government last year conceded 10 per cent reservation for economically weak among all the non-reserved categories including the “Patidars”(Patels). But the Hardik critics in the party are unwilling to be named at this stage and want to wait till the dates for the elections to the local self-government bodies due later this year, and the by-elections for eight seats to the state Assembly are announced. Hardik had joined the Congress in the presence of the then national president Rahul Gandhi just before the state Assembly elections in December, 2017, when age-wise he did not even qualified to contest an election.

The appointment of Paatil is being viewed in the political circles in the state as an indication of growing differences between the prime minister and his hitherto lieutenant- in- command, the Union Home Minister Amit Shah. Though a surprise choice, his name was doing rounds in the circles close to Modi since December when Vaghani’s extended term was ending, but a decision was further deferred due to stiff objections from Shah.

Vaghani, a close confidant of Shah, too was made from a no-body, not even known outside his home district of Bhavnagar, to the state unit president of the party. But those were different days when Shah was ruling the roost in the national BJP given all the credit for the party’s grand show in Uttar Pradesh in the 2014 Parliamentary elections that finally made the difference in bringing the BJP and Modi to power in New Delhi. Not only the state party president, Shah then was also given a free hand to pick up the successor of Anandiben Patel who was asked to quit chief ministership ostensibly for attaining the age of 75, the unwritten rule of Modi to force retirement from active politics of unwanted leaders around him. The real reason for asking her to resign was believed to be her government’s failure to contain the damage for the party among the Patels in the aftermath of Hardik Patel’s “Patidar Anamat Andolan.” BJP had to pay dearly for her failure almost losing the 2017 Assembly elections, but for Paatil who led the party to sweep all the 16 urban seats in Surat and the ruling party could retain power with a thin majority of seven seats. Even as chief minister, Shah chose his follower Vijay Rupani who like Vaghani was then just a second rung leader and did not even qualify as a caste leader, belonging to the miniscule Jain community. In selecting Rupani, Shah did not hesitate to overlook the strong claims of the Patels who wanted Nitin Patel to succeed Anandiben. But Nitin was only made Rupani’s deputy and he continued to occupy the same office when Rupani was re-appointed chief minister after the elections.

Paatil is a Maharashtrian by birth though in 1955 when he was born his birth place Jalgaon belonged to the erstwhile Bombay state of which the present Gujarat minus the Kutch-Saurashtra region was also a part. But his education and later his karmabhoomi had always been Gujarat having worked in the state police as a constable, suspended for some irregularities before he joined the BJP and came to politics in 1989. He was one of the few hand-picked by Modi who then was the organizing secretary of the state BJP having just come from the RSS ranks. His loyalty to Modi remained unshaken since and he personally supervised every election Modi contested from 2002 onwards. Paatil is not only the first non-Gujarati president of a Gujarat party, he is also the first non-Patel president of the state BJP in decades, a community that has always remained steadfast with the BJP ever since the formation of the party four decades ago. The large sections of the Patels did not like Paatil’s appointment and they expressed their ire by blackening his posters in Surat when he was to arrive in his home town as the new president of the BJP. The murmur of protest later spread to some other parts of the state but in a subdued tone. But all these factors matter little to Modi, he is confident that he can single-handedly win an election in Gujarat even if all other issues go against the party. And that was why Shah and his followers had to swallow the bitter pill quietly though could not hide the shock and disbelief showing on their faces.

Though not as the supreme commander where Amit Chavda continue to head the state Congress, the appointment of Hardik Patel as the working president next to Amit, like that of Paatil in the BJP, equally came as a major shock to the party veterans who were expecting rehabilitation in the party in view of the coming elections. Short of describing the party high command’s decision as “foolhardy,” several senior leaders on conditions of anonymity have publicly stated that Hardik was in no position to fetch the Patel votes to the Congress and in the process would also cause dent in the party’s base among the tribals, Muslims and some weaker sections among the OBCs. They maintained that a OBC working president would have helped the party’s cause much better than a “self-proclaimed” leader who no longer enjoyed any following even in his own community. Almost all of his lieutenants in the reservation agitation have since deserted him and several of them, particularly the more vocal ones, have now become active members of the BJP.

While the Congress is not serious about Hardik, the BJP is not taking him lightly and is not prepared to let him loose among the
Patidars. The BJP government has kept a close watch on his movements, not prepared to grant him any relaxation from the sedition case filed against him and some half-a-dozen others during the 2015 agitation. He has to report to the police station regularly after he was granted bail in January on condition that he would not move out of Gujarat without the court’s permission.

After appointed the working president of the state Congress, Hardik had applied to the Ahmedabad sessions court to withdraw the condition so that he could visit Delhi to meet the high command leaders but the application was vehemently opposed by the state government and was finally rejected by the court. His every movement is under the scanner of the state home department and in all probability would be put behind the bars before all important elections if the BJP anyway feel threatened.