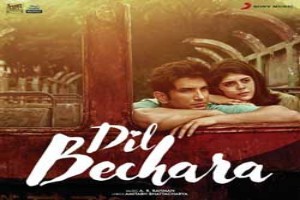 Sushant Singh Rajput’s most awaited last movie Dil Bechara was premiered on Disney Hotstar on 24 July at 7:30 pm (IST) for both subscribers and non-subscribers. Just like the trailer, the movie itself is making late Sushant’s fan awe at his performance and remember his work.

Sushant’s co-star Sanjana Sanghi has debuted in the Bollywood industry through Dil Bechara alongwith the directorial debut of casting director Mukesh Chhabra. The movie has received a rating of 10/10 on IMDB Internet movie database. Dil Bechara is a remake of the Hollywood movie The Fault in Our Stars featuring Ansel Elgort and Shailene Woodley in lead roles. The idea was adapted from John Green’s best-sold novel The Fault in Our Stars.

Dil Bechara revolves around Kizie, Manny, and how they embrace each other’s imperfections. While actress Sanjana Sanghi played Kizie, who is dealing with thyroid cancer and Late actor Sushant Singh Rajput played Manny who has osteosarcoma. In one of the scenes of the movie, Manny organized his funeral which seemed so real, as if Sushant knew it was his last movie. In the same scene when Manny’s friend JP said “Jabse hum Manny se mile tab vo 19 saal ka tha… Saala tabhi se uski smile katil hai… Aur phir jab hum usse mile to hum bhi uspe fida hogaye” struck Sushant’s fan really hard and once again made everyone fall in love with his smile, but this time with a heavy heart.

The demise of Sushant on June 14 left all his colleagues, fans and family at shock. Fans’ love for Sushant led to making the trailer of Dil Bechara, the most watched trailer. It had crossed 79 million views. As soon as the movie got premiered co-actor Sanjana Sanghi shared a picture on her Insta handle with Sushant which said, “My Manny I hope you’re looking over us, blessing us, and smiling upon us as we are,  looking up at you, searching for you, in equal parts awe and disbeliefs.

As director Mukesh Chhabra so correctly tweeted, “How could both our debut films ever be his last? Life is just so not fair Thank you for giving us the strength in ways known and unknown to somehow brave through this incredibly tough path. We can feel the strength every minute. It’s the only silver lining amidst so many dark clouds. The day apparently has come. It’s #DilBecharaDay. Here’s praying for peace, positivity and calm to each and everyone. Milte hain. Jald.”