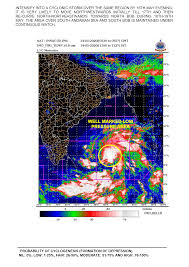 New Delhi: The Cyclone Warning Division of the India Meteorological Department, has said that yesterday’s Low Pressure Area over southeast Bay of Bengal (BoB) and adjoining south Andaman Sea, is very likely to concentrate into a Depression over central parts of south BoB on Friday and further intensify into a Cyclonic Storm over the same region by Saturday evening.

The cyclone is very likely to move northwestwards initially till Sunday and then re-curve north-north-eastwards towards north Bay of Bengal on 18th & 19th May.

In association with the above system, the conditions are also becoming favourable for advance of southwest monsoon over south BoB, Andaman Sea and Andaman & Nicobar Islands around  Saturday, it stated. It added: “Under the influence of the system, adverse weather is likely over south & central Bay of Bengal and adjoining Andaman Sea from 15th May onwards.”