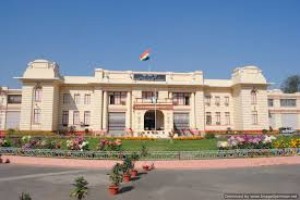 Patna: History of sorts was created today when the monsoon session of the state assembly had to be organised away from the majestic Bihar Legislative building due to the pandemic.

The session was instead held at Gyan Bhavan, a state-of-the-art convention with a seating capacity of 800 people, which was inaugurated by Chief Minister Nitish Kumar in 2017.

The shift in the venue was necessitated due to the prevailing COVID-19 situation. The legislative building does not have the capacity to accomodate 242 MLAs (excluding the speaker) as per the pandemic norms, informed Bhushan Jha, acting secretary of the Assembly Secretariat.

Jha said the new venue was sanitised for three consecutive days and the MLAs sporting masks were given entry after thermal screening  to ensure the honorable members were not exposed to COVID-19.

At least two MLAs, Chandrika Rai and Lallan Paswan, did not attend the session as they had tested positive for the deadly virus.

In many firsts, the traditionally four-day monsoon session was converted into a brief one day session.

Moreover the all important one-hour long Question Hour and Zero Hour of half an hour duration was given a go by, leaving the members high and dry.

The chair, however, allowed a brief debate on the situation arising out of COVID-19 and flood fury in 14 north-Bihar districts.

The monsoon session was adjourned after passing the supplementary budget and around a dozen bills.

As it is Monday’s session was the 16th and last session of the house before the state goes to the polls later this year.

As per Constitutional practices,  it is mandatory to convene the session within 6 months of the last session. Since the last session was abruptly adjourned on March 16, the house should have met before September 16.

Since there is a strong possibility that the Election Commission would take a call on the impending assembly poll by  September, the session was held today  to meet the Constitutional obligation .