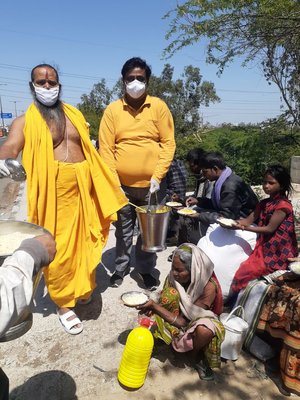 Patna:The exodus of thousands of migrant workers of Bihar from NCR following lockdown is slowly turning into a  political slugfest.

After chief minister and Janata Dal (United) president Nitish Kumar found fault with his UP counterpart Yogi Adityanath for arranging buses for migrant workers to different places of the state, his deputy Sushil Kumar Modi trained his gun at Delhi chief minister Arvind Kejriwal for the current situation, exposing a huge population to the risk of contracting dreaded virus but at the same time defended Yogi government for carrying out post-lockdown situation in a commendable way.

Launching a blistering attack on Kejriwal, Modi in his official Twitter account said, “People considering labourers from UP and Bihar ‘filth and burden’ on Delhi and after getting their votes by fleecing them with the promise of free electricity and water, forced them into collective exodus by spreading rumours at the time of Corona crisis.”

“Who is responsible for putting lakhs of poor people into trouble hundreds of kilometres away from their homes and villages,” Modi attacked Kejriwal through his poser.

Instead of condemning such an ‘inhuman’ politics, some people are trying to find fault with Bihar-UP governments, establishing a benchmark in disaster management, he added.

Modi also upped his ante against former JD (U) vice president and poll strategist Prashant Kishor for posting a video in his Twitter account, showing migrant workers pleading with mediapersons from behind a locked collapsable gate for their ‘release’ and journey to their native villages even as Bihar government has put them in relief camps for their medical test in bordering districts.

“One more frightening picture of official efforts to protect people from the coronavirus epidemic – poor migrants who came from various parts of the country after suffering many hardships are subjected to this heart-wrenching arrangement for social distancing and quarantine by Nitish Kumar,” Prashant Kishor tweeted on his former political mentor, with the hashtag #NitishMustQuit. The video was reportedly shot in Siwan district of Bihar.

Modi said that all such organisations and political parties, which have concern for the poor, are helping them during the lockdown. But on the other hand, people who have the background of conducting election survey and writing slogans, are indulging in petty politics instead of extending support to the state government at the time of serious crisis.

Modi said that more than 25,000 migrant labourers were taken to their native villages after their preliminary test but they would be kept in isolation camps for 14 days and would be allowed to go to their homes only after test reports confirmed them healthy. He also claimed that there was no laxity in preventing spread of the infection as block development officers (BDOs) and Mukhiyas are taking care of poor labourers in villages.

Meanwhile, altogether 15 Corona positive  cases have been detected so far in Bihar while two of them were declared cured and another one died during treatment in Hospital.

Bihar State Health Society said that total number of Corona positive cases in the state had reached 15 so far in the state. Two Corona positive cases were later found to be negative after treatment in Nalanda Medical College and Hospital (NMCH). One patient Mohammad Saif Ali had died during treatment in All India Institute of Medical Sciences(AIIMS) in Patna on March 21. Although report of his blood test was received after his death.