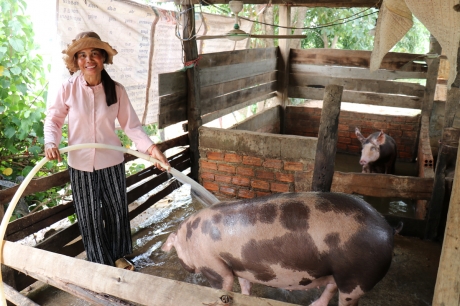 Hos Salop learned to analyse the trends of her family farm and develop a five-year business plan that focuses on meeting local demand. ©FAO/Chann Tet

In rural Cambodia, it has been traditionally inappropriate for women to work outside their homes. These deep-rooted social norms result in discrimination and marginalization of rural women, limiting their access to education, resources, employment opportunities and participation in decision-making processes.

However, Hos Salop’s days always began very early. She would cook breakfast for her husband and her three-year-old grandchild before working on her family farm in the village of Pongro in northwest Cambodia. She collected vegetables, fed the chickens and a pig, cleaned her house and dropped her grandchild off at school, all before heading to her full-time day job as a civil servant and member of the Ta Phou commune council.

Even though this job generated much-needed additional income for her family, her husband, Day Deat, a smallholder farmer himself, used to be against her working there.

At work at the council, Salop found that she could be confident and assertive, but she felt unable to do so at home. When faced with her husband’s remonstrations, she chose to remain silent.

On top of household tensions due to her employment outside of the home, Salop and Deat were racking up huge losses on their farm as flash floods were devastating their crops. In 2021, for example, they spent approximately USD 2500 to cultivate cassava but with no returns. This dire situation forced the couple to rethink their livelihood options and look for alternative solutions.

“The knowledge I gained from the WE-FBS training woke me up,” said Salop. “Before, I didn’t know what risks my farm was facing, how I could make more profit, how to make a better plan and how to understand the market.”

She also highlighted the benefits that the training made at home: “Women are empowered to share and discuss with their husbands, which leads to better mutual understanding and a greater willingness to share tasks. This approach has surely helped reduce household tensions as well as domestic violence while allowing people to learn how to farm more profitably.”

Since 2021, FAO and Cambodia’s Ministry of Agriculture, Forestry and Fisheries have jointly promoted a series of WE-FBS trainings, an innovative approach to foster gender equality and economic empowerment of rural women and men whose livelihoods depend on agriculture. Through the WE-FBS, women and men farmers become familiar with analysing markets to know what crops to grow, while getting the opportunity to discuss gender roles and challenges, critically reflecting on the root causes of gender discrimination, and coming up with solutions.

“We recognize that farmers cannot reach their full potential in agriculture unless social norms are addressed. So, we use this gender transformative approach to involve men and women to jointly address gender norms through family dialogue, while strengthening farmers’ entrepreneurial skills and enhancing their capacity to create business plans and analyse markets, which are key to the success of their farming businesses,” explained Rebekah Bell, FAO Representative in Cambodia.

The training equipped Salop with knowledge, skills and confidence. She analysed the trends on her family farm and developed a five-year business plan that she then presented to her husband, recommending switching from cassava to pig farming, a lower-risk market-oriented activity. “We will gain nothing if we keep doing as before because there will be flooding and it always inundates our field,” she recalled telling him.

Until early this year, she would not have been able to discuss and plan household matters with her husband or point out the disproportional share of work that fell on her shoulders. However, after participating in the WE-FBS activities, she was able to challenge these norms and better communicate with him to change his expectations. They both agreed to focus on rearing pigs after realizing the potential for swine products in their community. As a result, they increased the number of pigs they rear from one to ten.

Following the training, Salop was also able to explain to her husband the benefits of sharing their tasks more equally. “After discussing our plan, my husband started helping me collect and clean vegetables and feed pigs in the morning,” said Salop with a big smile on her face, noting the positive change in his behaviour. She also kept her job as a civil servant.

Currently, Salop is among 60 provincial and farmer facilitators from the Banteay Meanchey and Siem Reap provinces who received training directly from the project’s five national master trainers. They are expected to transfer the WE-FBS skills to a further 600 farmers in these two provinces.

“I am happy with my facilitator role working to transfer the knowledge I gained from the training to many other villagers,” said Salop. “I wish everyone from the 11 villages in this commune could join WE-FBS trainings.”

In the WE-FBS training, the FVC-funded project has trained 1 436 farmers, 57 per cent of whom are women, and is also promoting gender equality through the establishment of Dimitra Clubs. Dimitra Clubs facilitate socio-economic empowerment, women’s leadership and self-help. They are informal groups of rural women, men and youth who come together to discuss issues, including gender relations, and seek solutions. In Cambodia, FAO, in collaboration with the Village Support Group, has enabled 1 307 people to form 40 Dimitra Clubs in 20 villages of the Banteay Meanchey and Siem Reap provinces.