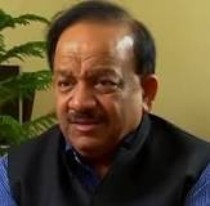 New Delhi:  Centre has told Delhi government to undertake “stringent containment activities” in face of the surge in fatality rate because of COVID-19 pandemic in the national capital.

“As the number of cases and fatality rises in Delhi, it needs to ramp up testing coupled with aggressive surveillance, contact tracing and stringent containment and perimeter control activities,” Union Health and Family Welfare Minister Dr. Harsh Vardhan, said at a high level meeting through video conferencing which was attended by Delhi’s  Lieutenant Governor, Anil Baijal, and the city-state’s health minister, Satyendra Jain.

Dr. Harsh Vardhan also expressed his concerns over the high rate of infection in the health care workers, which he said was a “serious issue”.

“It indicates poor infection prevention control practices in health care settings and needs to be attended to on priority,” he said, and underscored the immediate need and importance of scaling up of testing with health infrastructure enhancements along with better clinical management of the COVID-19 cases for effective case management and reduction of fatality rate.

The Union Health Minister also stressed the need to rapidly increase bed availability in view of current rapid rise of cases. He regretted that there were  “unnecessary delay “in admission of cases.

“As a significant proportion are on home isolation, all efforts for timely response in terms of testing, triaging and shifting of patients to the required level of Dedicated COVID facility is important to avoid mortality,” he stated. The elderly and vulnerable population, such as those with underlying co-morbidities, need to be identified and protected, he said, adding that provisioning of institutional quarantine to vulnerable populations in large clusters where home isolation is not deemed effective, needs attention too.

He also told the Delhi government to undertake the needed steps in adherence with the protocols and guidelines issued by the Centre from time to time for reduction in the case fatality rate and improved containment measures in Delhi.

It was advised that early detection of cases needs to be done by enhanced surveillance of ILI/ SARI cases. Fever Clinics and Flu corners in all Health care settings needs to be established in all corners of Delhi along with focus on contact tracing and surveillance. Use of Aarogya Setu app data for contact tracing was to be promoted. Risk communication and IEC Activities need to be enhanced as per target audience especially to avoid stigmatization of patients and their family members. Also non-COVID essential health care services need to be resumed.

All support is being extended to Delhi for the strengthening of health infrastructure and augmentation of testing facilities, Dr Harsh Vardhan stated during the Video Conferencing. After detailed discussion with the District Magistrates, Commissioners and Mayors of Delhi, he said that while some issues such as the density of population in many containment zones did pose a serious challenge to the collective efforts of the administration, it was important to pool in resources and experiences for a convergent action.

While appreciating the efforts of the frontline workers, administration and other COVID warriors, Dr. Harsh Vardhan advised that now more than ever, was the need for following norms and protocols related to physical distancing, hand and respiratory hygiene, maintaining sanitation in our surroundings, respect for the doctors and other frontline health workers, not listening to and spreading rumours, helping to spread the authentic and correct information to help others, to be kind and supportive to the needy, elderly and vulnerable population. “ I am confident that with our collective efforts, we shall be able to succeed in this war against COVID-19”, he stated.

In the meantime, The Confederation of Indian Industry (CII) committee on National Tourism has appealed to Delhi Chief Minister Arvind Kejriwal to reconsider the decision to use hotels for hospitalisation of Covid-19 patients.

The Committee in a letter to the Delhi Chief Minister, pointed out that the hospitality and tourism sector was already deeply impacted by the pandemic and that it estimated a loss of about 5 lakh crore and job losses of around 3 crore. “We were, therefore, taken in by surprise by the administration’s notification of requisitioning hotels for purpose of hospitalisation of Covid positive cases and as an extension of designated hospitals,” Dilip Haskar, Advisor, CII National Committee on Tourism and Hospitality, wrote in the letter to Kejriwal.