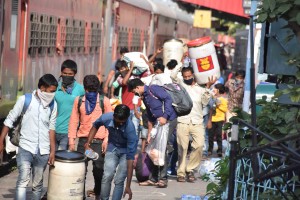 Patna:  The Bharatiya Janata Party has apparently emerged stronger in Bihar National Democratic Alliance (NDA)  ahead of state assembly election this time with chief minister Nitish Kumar suffering bruises in battling the crisis arising due to return of lakhs of migrants to the state following lockdown.

Even as political parties in the state are braving the Corona scare to gear up for the crucial state assembly election, Janata Dal (United) president Nitish Kumar is facing the accusation of not handling the migrant crisis efficiently.

So, unlike many other chief ministers who broadened their support base amd strengthened their positions politically, Nitish seemingly lost the opportunity, particularly when the election is round the corner in the state. BJP, would of course try to take the political advantage of it and JD (U) should be ready for some tough bargaining for seats by BJP.

Nitish is already facing flak from opposition and even common people for his botched-up anti-liquor drive and also struggling anti-incumbency factor to some extent after nearly 15-year rule. But his initial opposition to the return of migrant workers and also of students stranded in Kota to Bihar only created doubts about his intentions towards them, casting shadow on his claim over good governance. He accepted their return only after the opposition’s hue and cry so unlike Uttar Pradesh chief minister Yogi Adityanath, who turned the situation into his favour by reaching out to them with a sense of urgency, he fumbled when clarity in policy was most needed. Even after the return of migrant workers to the state, they suffered inadequate facilities at the quarantine centres, prompting them to agitate over it vehemently as they also turned violent on some occasions.

Now, they are again returning to Punjab, Haryana and other states, pooh poohing promise of Nitish to provide them jobs in Bihar. Their common refrain is that such promises would not feed them and their families. Even if migrant workers are not going to cast their votes as they are going back to their places of work, their families will never forget their plight after the lockdown and it would be difficult for Nitish to inspire confidence among them within such a limited time.

Lok Janshakti Party chief Chirag Paswan has only added to the confusion by saying BJP, being the largest partner of NDA has to decide on the name of chief ministerial candidate.

Paswan caused further embarrassment to the Nitish government by contending that migrants’ crisis could have been handled in a better manner.

“If Bihar government had started transporting migrants earlier, we could have the example of the likes of Jyoti Kumar…deaths of many labourers on their way to home could have been probably avoided,” he said in an interview.

*The writer is a senior Patna-based journalist