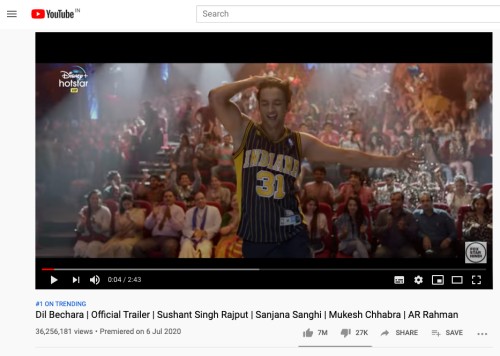 Mumbai: His fans are coming together to give a fitting tribute to their hero, Sushant Singh Rajput, who died on June 14, allegedly by committing suicide.  The Trailer of Dil Bechara, the actor’s  last movie was released on Monday. It indeed made a buzz as this was viewed by a whopping 36,256,181 views by Tuesday night with over 7 million likes and still counting. It had invited  401,175 comments too by then. Right now it is “# 1 ON TRENDING” on You Tube.

The  ‘Dil Bechara Trailer’ hashtag is trending on Twitter since its release and the late actor’s fans are ensuring that the Trailer must break a record and #DilBecharaTrailer should become one of the top patterns on Twitter.  Fans also wish that this trailer should turn into the most remarkable trailers in Indian film’s history on YouTube.

Before the trailer’s release, the lead actress of the film Sanjana Sanghi took to Instagram and stated, “Kizie is totally incomplete without Manny. This is one of my preferred shots, so strange and unreal the #DilBechara trailer will be out tomorrow. All of you? Simply stay tuned.” She concluded, “We miss you so much Sushant. Much obliged to you, for your affection.”

Sushant’s fans had wanted Sushant’s last film’s trailer to make a big hit on the internet beating Shah Rukh Khan’s Film ‘Zero’ trailer. The trailer of Shah Rukh Khan’s ‘Zero’ (Directed by Aanand L Rai, it had Anushka Sharma and Katrina Kaif in lead roles) had crossed 127 million views, and Sushant fans had been targeting to cross that record. They made all efforts to make it a blockbuster. Needless to say that their efforts now have a telling impact.  Dil Bechara Trailer has already made a record by becoming the most liked Indian film trailer on YouTube. It broke the record recently held by the official Tamil trailer of Thalapathy Vijay’s film  Bigil, which had got 2.3 million likes to date.  The trailer of Sushant’s film has already got over 7 million likes on You Tube alone within two days and it is still counting.

Fans of Sushant have been praising this record and accomplishment with a bittersweet feeling as their hero is no more amidst them.

It may be mentioned that the film Dil Bechara is directed by Mukesh Chhabra. It is inspired by  the Hollywood film, Fault In Our Stars. The film will be released on Disney+ Hotstar on July 24.  As Sushant’s fans are eagerly waiting to watch his last film, there is a buzz that this film is going to be the super duper hit.

5 thoughts on “As fans wait for the film’s release, trailer of Sushant Singh Rajput’s last film is breaking all records”