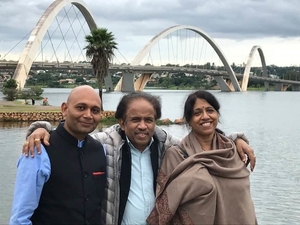 File photo of poet-diplomat Abhay K., Dr. L. Subramaniam, and Kavita Krishnamurti. They came together with new Earth Anthem video on the Golden Jubilee of Earth Day, on April 22 this year.

Bangalore: To mark the Earth Day 2020, noted violinist Dr. L. Subramaniam has produced a new video of the Earth Anthem set to music by him, penned by Bihar-born poet-diplomat Abhay K. and sung by renowned playback singer Kavita Krishnamurti Subramaniam and Bindu Subramaniam.

The video will be released on Wednesday, 22 April 2020 to mark the golden jubilee celebrations of Earth Day.

The song was originally produced in 2017 by Dr. Subramaniam with English lyrics. Earth Anthem has been translated into over 50 different languages spoken in different parts of the world.

Dr. L. Subramaniam has also been recently appointed as the ambassador of the Earth Day Network which is celebrating the golden jubilee of Earth Day this year.

Abhay K. , who at present is serving as India’s Ambassador to Madagascar and Comoros, had penned the Earth Anthem in 2008 in St. Petersburg, Russia inspired by the ideal of ‘Vasudhaiva Kutumbakam’ from the ancient Indian texts and the blue marble image of the Earth taken from space by the crew of Apollo 17.

Elaborating upon the need for a common anthem for our planet, Abhay K. told globalbihari.com from Madagascar’s capital Antananarivo –“The global spread of Corona virus has proved our interdependence once again, whichever country we come from, we can not remain indifferent. Similarly, environmental pollution, biodiversity loss and climate change affect all of us, it does not matter whether we live in global north or south or east or west. All life is interdependent and until we understand this basic fact clearly and wholeheartedly, we will not be able to fight climate change, biodiversity loss or Novel Corona Virus pandemic.”

Words of the Earth Anthem such as ‘All the peoples and all the nations, one for all and all for one’ take all the more importance today when we are all fighting a common enemy, i.e. COVID-19. A common anthem, therefore, can inspire people from all countries, connect us all across the world through a common musical thread and inspire the next generation to put the planet before themselves.”

Maestro Dr. L. Subramaniam, celebrating the golden jubilee of Earth Day celebrations said– “We are dependent on nature and we are part of nature. We are not the masters of nature; it doesn’t belong to us. We have to co-exist with mountains, oceans, trees, and all living beings and so we cannot afford to harm the planet in any way.” The maestro is now busy composing Cosmic Symphony, the theme of which is inspired by the navagraha concept. It is a composition dedicated to the nine planets, written for a full symphony orchestra and choir.

Dr. L Subramaniam is widely known as a phenomenal violinist, composer, and creator of the Global Fusion idiom. A lesser-known aspect of his compositional oeuvre is his symphonic/orchestral works. He is the first Indian to compose a full-fledged symphonic work. In 1983, Dr. Subramaniam wrote his first orchestral composition for a symphony orchestra in Los Angeles and in September 1985, his Fantasy on Vedic Chants was premiered in Lincoln Centre with the New York Philharmonic conducted by Zubin Mehta. Spread over nearly forty years, he composed close to twenty-five major orchestral compositions, most of which have been now published by Schott, the leading European publisher of Western classical music. Recordings of several of these compositions with major symphony orchestras around the world have also been released. He was awarded Padma Bhushan award.

Abhay K. is the author of eight poetry collections and the editor of The Bloomsbury Anthology of Great Indian Poems, CAPITALS and New Brazilian Poems. He was invited to record his poems at the Library of Congress, Washington DC and received SAARC Literary Award. His call for a common Earth Anthem has been termed inspiring by UNESCO and is supported by Habitat for Humanity, Dadasaheb Phalke award-winning director Shyam Benegal, Oscar-winning director Jefferey D. Brown, Bollywood actress Manisha Koirala, and Hollywood actor Robert Lin, among others. It was performed by the musicians of the Amsterdam Conservatorium and the National Symphonic Orchestra of Brasilia.

Kavita Krishnamurti Subramaniam is one of India’s most celebrated film playback singers. Trained in classical music, she has sung a wide range songs in many different Indian languages. She has worked with a variety of music composers including Laxmikant-Pyarelal, R. D. Burman, and A. R. Rahman. She has received four Filmfare Best Female Playback Singer Awards. She was the main featured soloist in the Global Fusion album released by Warner Bros., featuring musicians from all the five continents. She is also the main soloist of Bharat Symphony, a composition written by Dr. L. Subramaniam and performed as well as recorded with the London Symphony Orchestra and The London Voices. She was awarded Padma Shri award.

Bindu Subramaniam is a singer/songwriter, entrepreneur, author, and music educator. She is the founder and lead singer of the band Subramania.[the_ad_placement id=”sidebar-feed”]