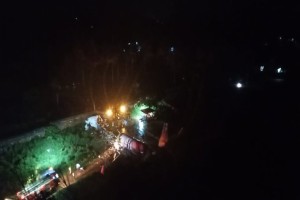 Kozhikode: The Air India Express flight (IX 1344 DXB CCJ) from Dubai to Calicut, carrying 174 passengers, 10 infants, two pilots and 5 cabin crew, overshot runway at Kozhikode and broke into two parts on Friday evening around 7.45 pm. Co-pilot of the flight, Captain Deepak Vasant Sathe, a former IAF pilot who had retired as an ace test Pilot, was among those killed while several passengers were reported to be injured, preliminary reports said.

A news agency puts the death toll at 16 deaths. Unconfirmed media reports suggest that condition of  at least 30 passengers was serious.

This was a Vande Bharat repatriation flight . “The flight fell down into the valley after landing at Runway 10 of Karipur Airport and broke down in two pieces,” Director General of Civil Aviation stated, adding that “The visibility was 2,000 meter at the time of landing.” The Ministry of Civil Aviation said no fire was reported at the time of the plane’s landing. It stated that rescue operations are on and passengers were being taken to hospital. Minister of Civil Aviation tweeted: “The @FlyWithIX flight number AXB-1344 on its way from Dubai to Kozhikode with 191 persons on board, overshot the runway in rainy conditions & went down 35 ft. into a slope before breaking up into two pieces.”

Prime Minister Narendra Modi spoke to Kerala Chief Minister Pinarayi Vijayan,and the CM informed him that  a team of officials including the district collectors of Kozhikode and Malappuram were at the site of the crash. Vijayan also directed the police and fire officials to take urgent action, and ordered the officials to start rescue operations and bring in medical support.

The PM tweeted: “Pained by the plane accident in Kozhikode. My thoughts are with those who lost their loved ones. May the injured recover at the earliest. Spoke to Kerala CM @vijayanpinarayi Ji regarding the situation. Authorities are at the spot, providing all assistance to the affected.”

Defence Minister Rajnath Singh also took to twitter and stated: “Devastating news from Kozhikode, Kerala. I am deeply anguished by the loss of lives due to an accident carrying several passengers on Air India flight. In this hour of grief, my thoughts are with the bereaved families. I pray for the speedy recovery of the injured.”

Union Home Minister Amit Shah tweeted, “Distressed to learn about the tragic accident of Air India Express aircraft in Kozhikode, Kerala. Have instructed NDRF (National Disaster Relief Force)  to reach the site at the earliest and assist with the rescue operations.”

NDRF Director General SN Pradhan tweeted: “#Kozhikode airport @airindiain express #AI1344 from Dubai skidded off runway Reported damage to aircraft Approx 180 passengers onboard Nearest @NDRFHQ.” He added that while the NDRF team was rushing to the accident site, it was a “tabletop” runway, “so it seems to have crossed that runway and fallen into a ditch sort of, because there’s a differential between the runway and the other parts of the airport, and because of that impact there seems to have been a breaking of the fuselage into two…“The aircraft – the front portion – seems to have been very badly mangled and damaged”.

Air India Express stated that help centres were also being set up at Sharjah and Dubai.