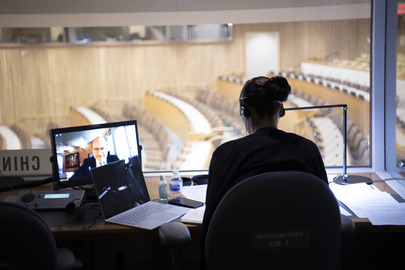 An interpreter at work during the high-level virtual event on Financing for Development in the Era of COVID-19 and Beyond at the United Nations. -UN Photo/Evan Schneider

The General Assembly on Tuesday (IST) passed the resolution that was presented by the United Arab Emirates, by consensus.

By its terms, the Assembly decided that its special session on challenges and measures to prevent and combat corruption and strengthen international cooperation will be held in New York from 26 to 28 April 2021.  It also requested the Conference of the States Parties to the United Nations Convention against Corruption to hold its own special session, for the purpose of approving a “concise and action-oriented” political declaration for the General Assembly’s adoption during the April special session.  Other terms of the resolution lay out the modalities and organizational arrangements for the Assembly’s special session.

By other terms of the resolution, the Assembly decided that representatives of non-governmental organizations in consultative status with the Economic and Social Council will be invited to participate, and that the President of the General Assembly will draw up a list of other relevant delegates — including representatives of civil society organizations, academic institutions and the private sector — while taking into account the principles of transparency and equitable geographical representation, and with due regard for the meaningful participation of women.

It further encouraged the United Nations Office on Drugs and Crime, subject to the availability of extrabudgetary resources, to organize a youth forum to discuss ways for young people to contribute to efforts to prevent and counter corruption.

In a written explanation of position, the Permanent Mission of Israel to the United Nations disassociated itself from the Assembly’s consensus on Operative Paragraph 15 of the resolution, which invited all Member States, observer States and observers to attend the April 2021 special session.  It also spotlighted the fact that the text was not negotiated in New York.

[Under decision, “Procedure for taking decisions of the General Assembly during the coronavirus disease 2019 (COVID‑19) pandemic”, adopted on 27 March 2020, the Assembly President is authorized to circulate, after consultation with the General Committee, its draft decisions to all Member States under a silence procedure of at least 72 hours.  If the silence is not broken, the decision should be considered adopted.  On 15 May 2020, the silence procedure was extended until the end of June 2020.]