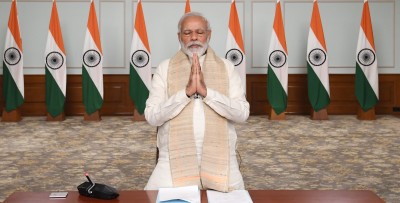 New Delhi:  While Defence Minister Rajnath Singh reviewed the Ladakh Border situation with Chief of Defence Staff and Secretary Department of Military Affairs General Bipin Rawat, Chief of Army Staff General M M Naravane, Chief of Naval Staff Admiral Karambir Singh and Chief of Air Staff Air Chief Marshal R K S Bhadauria on Wednesday Morning, Prime Minister Narendra Modi, without naming China, made a statement that “India’s integrity and sovereignty is supreme for us, and no one can stop us from protecting it.”

Referring to the the supreme sacrifice made by 20 Indian soldiers during a violent clash between Indian and Chinese soldiers in Galvan Valley of Ladakh on Monday, the Prime Minister “assured” the country that “this  sacrifice of our martyrs will not go in vain”.

While stressing that whenever it became necessary, India had demonstrated its power and proved its capabilities in protecting the integrity and sovereignty of the country, he added: “Renunciation and education are part of our national character, but at the same time bravery and valor are equally part of our country’s character.”  He further reiterated: “Whatever be the situation, India will firmly defend the country’s self-respect for every inch of land.” He added: “Nobody should have any confusion or doubt about this. India wants peace. But on provoking India, a decisive answer will also be given.”

Modi said India had always worked closely with its neighbours in a cooperative and friendly manner. “Wherever our differences have been, we have always tried that differences should not become disputes, differences should not change in disputes,” he said and pointed out that  India’s history has been of peace. “The ideological mantra of India has been – Loka: Samasta: Sukhino Bhavantu. In every era, we have wished for peace and peace for the entire humanity,” he said but in the same breadth he added: “We never provoke anyone, but we also do not compromise with the integrity and sovereignty of our country.

Paying tributes to the martyrs, the Prime Minister said: “The brave sons of Bharat Mata have made the supreme sacrifice while protecting our motherland in Galvan Valley. I bow to them for this great sacrifice in the service of the country. I gratefully pay tribute to them. In this difficult time of grief, I express my condolences to the families of these martyrs. Today the whole country is with you, the feelings of the country are with you.”

Modi said the country will be proud of the fact that the soldiers died, after killing the enemies and a two-minute silence was also observed on day two of the meeting between PM Modi and state chief ministers, to pay tribute to the martyred Indian soldiers in the Galwan Valley face-off between the Indian and Chinese Army.

It may be mentioned that the Indian army on Tuesday night revised its earlier statement of 3 soldiers including a colonel getting killed, and stated in all 20 Indian soldiers were killed in the violent clash in the valley on Monday night. While the Chinese government did not come out with any statement on the casualty on their side, media reports attributing to sources suggested there were over 40 Chinese casualties.

The Indian foreign ministry in a statement on Tuesday had accused China claiming the it “departed from the consensus to respect the Line of Actual Control (LAC) in the Galwan Valley”. Beijing, though has accused India of crossing the border, “attacking Chinese personnel”. China’s Foreign Ministry was quoted by an international wire service as saying India should not take unilateral actions or stir up trouble.

Indian defence minister Singh in his tweet on Wednesday, though said, “The loss of soldiers in Galwan is deeply disturbing and painful. Our soldiers displayed exemplary courage and valour in the line of duty and sacrificed their lives in the highest traditions of the Indian Army. The Nation will never forget their bravery and sacrifice. My heart goes out to the families of the fallen soldiers. The Nation stands shoulder to shoulder with them in this difficult hour. We are proud of the bravery and courage of India’s bravehearts.”

It may be mentioned that for more than six weeks, soldiers from both sides are engaged in a stand-off on at least two locations along the Line of Actual Control – at the Galwan River, and at the Pangong Tso – a glacial lake at 14,000 feet in the Tibetan plateau. However, on June 6, the Indian Defence Ministry had issued a statement saying, “Indian and Chinese officials continue to remain engaged through the established military and diplomatic channels to address the current situation in the India-China border areas.  At this stage, therefore, any speculative and unsubstantiated reporting about these engagements would not be helpful and the media is advised to refrain from such reporting.”