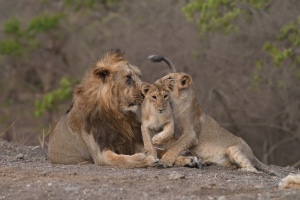 New Delhi: The population of Asiatic Lions, living in Gujarat’s Gir Forest, has  shown a steady increase with a population of 674 individuals with an increase rate of 28.87% (one of the highest growth rate so far) from the previous growth of 27% during 2015 (523 lions).

The population structure of Asiatic Lions in the Asiatic Lion Landscape (June 2020) was as follows:

The 15th Asiatic Lion Population Estimation was scheduled during June 5 and 6, 2020, but owing to the present COVID-19 situation, it was not conducted as planned. Therefore, in order to develop an understanding of the current population status and distribution of Asiatic Lions in the Asiatic Lion Landscape, the Gujarat Forest Department conducted an exercise familiarly called Poonam Avlokan on June 5 and 6, 2020 using the “Direct Beat Verification” also known as the “Block Count” method.

The exercise was conducted exclusively by the forest staff of thirteen administrative divisions (Figure 2) under the supervision from the respective administrative authities involving a total manpower of around 1400 personnel.

Over the last several years, the Lion population in Gujarat has been steadily rising. Acknowledging this, Prime Minister Narendra Modi, who hails from the state, tweeted on Wednesday evening that this was “powered by community participation, emphasis on technology, wildlife healthcare, proper habitat management and steps to minimise human-lion conflict”.

It may be mentioned that the Asiatic lion, who once faced with imminent extinction, has shown a population recovery which has been acclaimed as a global conservation success story. This could be achieved because of the  the timely intervention by the erstwhile Nawab of Junagadh in pre-Independence period, and protection regimes of the Gujarat Forest Department in the post-independence era.

Today, Asiatic lions are present in Protected Areas and agro-pastoral landscape of Saurashtra covering nine districts in a sprawling expanse of over 30000 sq. km which is termed as the Asiatic Lion Landscape.