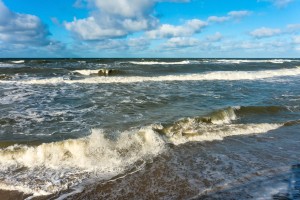 New Delhi: The deep depression has intensified into a Cyclonic Storm “NIVAR” over southwest Bay of Bengal and a cyclone alert (Yellow Message) has been sounded for coastal Tamil Nadu and Puducherry, the Cyclone Warning Division of India Meteorological Department stated today.

The cyclone is likely to cross Tamil Nadu and Puducherry coasts between Karaikal and Mamallapuram around Puducherry during November 25 evening as a severe cyclonic storm with a wind speed of 100-110 kmph gusting to 120 kmph.

Tidal wave of about 1metre height above the astronomical tide is very likely to inundate the low lying areas of north coastal districts of Tamil Nadu & Puducherry near the place of landfall.

The IMD has warned fishermen against venturing into Southwest and adjoining west-central and southeast Bay of Bengal, Gulf of Mannar and along and off Tamil Nadu, Puducherry and south Andhra Pradesh coasts.

Forecast track and intensity are given below: In a tweet, the Prime Minister said, “Spoke to Tamil Nadu CM Shri @EPSTamilNadu and Puducherry CM Shri @VNarayanasami regarding the situation in the wake of Cyclone Nivar. Assured all possible support from the Centre. I pray for the safety and well-being of those living in the affected areas.”

Meanwhile, a close watch was being kept over the system, the Ministry of Home Affairs stated in its evening release today.  National Disaster Response Force (NDRF) Head Quarters and Commandants of battalions located at Tamil Nadu and Andhra Pradesh were in coordination with the respective state authorities. In view of the India Meteorological Department (IMD) forecast and requirements projected by the state authorities, 22 teams (12 teams in Tamil Nadu, 03 teams in Puducherry and 07 teams in Andhra Pradesh) had also been pre-positioned at likely affected areas. Teams were also kept as reserve at Guntur (Andhra Pradesh), Thrissur (Kerala) and Mundli (Odisha) to meet additional requirements.

“All teams have reliable wireless and satellite communications, tree cutters/ pole cutters for post landfall restoration, if need arises. In view of the current COVID-19 scenario, NDRF teams are equipped with appropriate PPEs,” the Ministry stated, adding that the NDRF was working in close coordination with district and local administrations. “Awareness programmes are being conducted for all citizens in the form of information about cyclones, do’s and don’ts and information about COVID-19 in affected areas and prevention measures.  All deployed teams are assisting the local administration in evacuation of people from areas that are likely to be affected by the cyclone. NDRF is spreading a sense of security amongst the communities that teams are available at their service and will remain present in the area until the situation returns to normal, so that the public does not panic,” it stated.