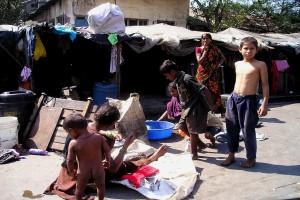 Mumbai: Multiple rounds of negotiations between stakeholders, besides attempts at complete redevelopment of Asia’s biggest slum, Dharavi that is centrally located in India’s financial hub, Mumbai, have failed to come to any conclusive decision owing to multiple litigations between successive teams of developers and the civic administration.

In fact, it’s an ominous portend to residents who try to force the pace of redevelopment proactively. The major stumbling block the developers face is owing to the vested interests of land sharks who control the finances and fund flow of the properties they possess and lease out for both residential and commercial purposes. Maniyaar (name changed) well into his seventies, recalled how things shaped soon after the Prime Minister’s Grant Project (PMGP) was announced by late Rajiv Gandhi in the late eighties. “There came up a host of newly constructed concrete structures. However, the land sharks ensured that these flats were given to people from outside of Dharavi, who already hold residential property within the city limits. In other instances, they helped the residents to obtain possession of the flat and lease it out on rent, and continue staying in the slum premises.”

“As time passed by, the land sharks who were also in cahoots with the local entrepreneurs besides state government authorities managed to delay the pace of constructions and also consolidated their hold over the slum territory by permitting vertical expansions of the slum structures and allowing the already saturated slum complex to accommodate more and more migrant tenants. This caused acute problems for legal tenants with proper documents, like shortage of potable water and over-burdened open sewage gutters causing unhealthy living conditions. The land sharks seem to always be winning as the successive governments in the state kept extending the baseline for legal tenancy repeatedly. Consequently, the cut off year which was at first 1986 has now entered the post millennium era,” he added.

Actually what came to light with some of the old-timers including Maniyaar, who have been watching the seemingly unending drama play out, is nothing startling.

“The symbiotic relationship shared among the sharks; industrialists carrying out job works in the area of leather tanning, garment manufacture, earthenware and sundry; and government officials handling occupancy issues besides their political bosses who operate from behind the scenes has ground the redevelopment project to a halt,” explained another of the elderly tenants.

The locals emphasized that the equation got symbiotic as the sharks benefit from increased number of tenancies, the politicians too benefited from a higher number of supporters belonging to their respective captive vote banks.

The most recent picture that is yet to clear up is Seclink Technologies Corporation (STC) winning the bid for redevelopment of the slum property, quoting INR 7200 crores nearly two years back in 2019. However, the bid needs to be re-ratified as the then state government acquired the adjoining railway land at INR 800 crores. The acquisition now calls for a revised pricing, meaning floating for fresh bids owing to the augmentation of the property value.

The current government under Chief Minister Uddhav Thackeray has already cancelled the bid with STC and has called for floating of fresh tenders. Meanwhile, the plight of Dharavi residents is still plagued with a mirage-like uncertainty.