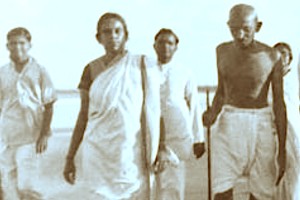 In the last phase of Gandhiji’s life, his close associates had deserted him

(From my father Narayan Desai’s book on the Partition and Gandhi ji. Translated from Gujarati to English by Nachiketa Desai)

The last phase of Gandhiji’s life was like the final test of his steadfast nature. On the surface, he appears to have failed completely but in his inner equanimity he had succeeded cent per cent.

His life journey has a historical aspect, a political aspect and a spiritual aspect. From the historical perspective, India had attained freedom but the country stood partitioned. Politically, Congress had come to power in one part of the divided nation. Similarly, the Muslim League too had come to power in a divided Pakistan. Spiritually, Gandhiji stuck to his perceived truth till the end and sacrificed his life in his effort to establish love.

Gandhi’s dream was almost completely shattered, barring his prediction about his death. The country did not remain one. There was no peace between the two nations. The largest organisation instrumental in leading the nation to freedom did not even entertain the thought of engaging itself in serving the people instead of ruling them. A peace brigade capable of combating the nation-wide violence with a bare chest could not be established. The various institutions set up by Gandhi for carrying out his national reconstruction programmes had not followed his advice of becoming service-oriented. His close associates who had supported him for over three decades in good and bad times had now deserted him.

Also read: “At a public meeting in Gaya, for the first time Jinnah appealed in the name of Islam”

But Gandhi remained firm in three matters – he desired the well-being of the people of both the countries, stuck firmly by his truth and worked tirelessly, leaving the rudders of his own life in the hands of God.

There were more than one factor responsible for the partition of the country. There can be many answers to the question as to who was more responsible for this. However, one thing we cannot negate is the fact that we ourselves created a favourable ground for partition.

We cannot find an institution like caste anywhere in the world except in places inhabited by the Indians. We Indians took with us the caste system not just to Pakistan and Bangladesh but also to Mauritius, Surinam, South Africa, England, America and Canada, the other countries where the Indians migrated and settled down. Leave aside the benefits of caste and its roots, the caste system created differences between human kind, gave rise to the feeling of superiority and inferiority amongst them and also the social evil of untouchability of various degrees. When communalism entered our society, the divisive forces attained greater success.

By the time the British arrived, casteism and communalism had already gained firm roots in our country. This provided the most favourable ground for the British imperialism. Hereafter more castes and sub-castes emerged.

Most of the Muslim kings adopted this as as their own country and settled down here. There were also those who plundered the country and went back. But the plunderers belonged to the same caste – all were plunderer. Both Hindus and Muslims participated in a big loot whether the loot be of temple or mosque of the rich or the common people. The looters were the same. We shall refer to them as just looters.

The Britishers came, first to trade and then to rule. They did not consider this land as their own to settle down. They collected wealth from here and took it back to their homes across seven seas. “Divide and rule” is a well-known principle of the imperialists. This principle came in handy to the Britishers to rule over our country and a favourable ground for this was provided by our casteism and communalism.

A noteworthy fact is that there has been no communal violence throughout the centuries of Hindu-Muslim co-existence and such violence started occurring only after the arrival of the Britishers in India. There used to be violent clashes and wars, but these were not communal violence. If two people or families belonging to different communities clash, it cannot be termed as communal violence. There have been wars between Hindu kings and Muslim kings. Yet, these cannot be described as communal violence because there were Hindu and Muslim soldiers and generals in both the warring armies. In communal violence the revenge for the fault, mischief, misdeed or violent act of an individual of a community is taken on any other member of the same community, even though the person is completely innocent, just because he belongs to the same community to which the mischief maker belongs. The revenge for an incident of a place is taken in a completely different place ; the revenge for a perceived incident, true or imaginary, that is believed to have happened is taken several days, months, years or even centuries later. The reason for such vengeful act is that the persons involved in such incidents belong to the same community. Such incidents of communal violence have happened in our country only after the Britishers came.

It is possible that such a quarrel might also be the result of the conspiracy of a third party other than those actually involved. Whether this conspiracy is direct or indirect depends on the cleverness of the third party and the foolishness, degree of enmity and fanaticism of the two warring parties. In such cases the history taught to the communities from different perspectives also plays a crucial role. The intoxication of hatred is so intense that the third party needs to provide just the pretext, and that too without coming to the forefront. The actual fighting is done by the victims of the conspiracy who later on find fault with each other and not of the third party.

The 1857 war of independence largely remained confined to the princely class and the sepoys. But it was instrumental in instilling a sense of nationalism among the Indian leaders. The Britishers thereafter decided to scrupulously follow in a systematic manner the time tested ‘divide and rule’ policy if they wanted to retain their imperialistic rule over India. India was the jewel in the crown of England whose rule extended over five continents of the world. In the foundation of England’s total wealth was spoils from India. It also got a large section of its army from India.

They set up a strong education system in India to supply them with servants of different ranks with slave’s mentality to run the administration of this vast country. After taking full charge of the colony, the Britishers replaced the country’s age-old customs and traditions, in existence for hundreds of years, with their own systems with the active support of the slaves they had educated and trained in English, their own language.

This system of education had a long-term plan. Through their long-term economic plan, the Britishers sent various kinds of raw material from all across the country to England, made finished goods in the factories set up their with the capital accumulated through India’s plunder, and sold them in India and other countries at highly lopsided export and import duties to their own advantage.

An important aspect of their long-term political plan was the ‘divide and rule’ policy. In a way it was like the famous fable of two cats and a monkey which they pursued brazenly or clandestinely for 90 years from 1857 to 1947. Both Hindu and Muslim princes fought shoulder to shoulder in the 1857 war of independence. But since the Muslim emperor reigned over the throne in Delhi, Britishers thought that if Indians emerged victorious the Muslim emperor would directly or indirectly call the shots in the regime. Thus began the imperialistic game of supporting the Hindus and disfavouring the Muslims. The first assault was on the Persian language which was the preferred administrative language during the Mughal reign. English replaced Persian language in courts, government offices and schools. For nearly three decades after 1857, the Hindus enjoyed the patronage of the British rulers. In the formation of the Congress in 1885, even the British officials played an important role. However, the British rulers became wary of the Congress as it became better organized. Shortly after the foundation of the Banaras Hindu University, the Aligarh Muslim College was set up which was soon upgraded to Aligarh Muslim University. British registrars played crucial role in the administration of the Aligarh Muslim University. Shortly, Aligarh became the center of Muslim politics. It was at the signal of the registrar of the Aligarh Muslim University that a delegation of muslims met the viceroy at whose suggestion Muslim League was formed in far off Dhaka. When in the Cocanada Congress session Maulana Mohammed Ali described the League as ‘Command performance’ he hinted at this development. By this time (1906), the Congress had started talking about the rights of the countrymen and so as a counter balance such an organisation was floated. During the same period, as a part of the Morley-Minto plan (1909), Muslims were given separate voting rights in local bodies which was the first devious move to divide the country’s two largest communities. Initially the demands of the Congress and the League were almost similar. The annual conferences of both the organisations also used to be held in the same cities in nearby dates so that their leaders can address members of both the organisations. Till then, dual membership was allowed by both the organisations.

In 1905, a systematic attempt was made to create chasm between Hindus and Muslims by partitioning Bengal. The British rulers took advantage of the fact that the population of Muslims was more in East Bengal and that of Hindus more in the West to create a permanent wedge between them. But this proved counter-productive. There was a massive upsurge against the partition. Both the communities fought the move hand-in-hand. The movement was instrumental in creating awareness about the issue in rest of the country. At the time leaders like Sir Syed Ahmed and Iqbal declared that all who lived in Hindustan are known as Hindu. At the time of the Montague-Chelmsford reforms (1918) too there was an effort to put the divide and rule principle on a firmer ground by giving separate voting rights to Muslims in the local body elections. During the Khilafat movement (1919-1924), the country witnessed scenes of Hindu-Muslim unity, though half-hearted in nature, as a result of the combined efforts of Gandhiji and Ali brothers. However, such scenes too became rare after then movement ebbed.

Satisfied over the success of the divide and rule policy, the India affairs minister Sir Samuel Hoare wrote on October 2, 1931, at the time of the Second Round Table Conference: “The delegates have moved further away this time compared to last year. I believe there is very little possibility of a communal solution in the minority committee.”

But the chasm became real serious after the 1937 elections. Even the distant prospect of power was successful in creating this chasm. This book seeks to tell the remaining part of the story.