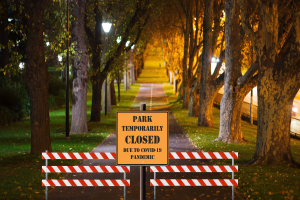 The COVID-19 shutdowns with all their painful ramifications had one bright spot across the Earth system– their curbing impact on air pollution in places accessible and remote. People curtailed their activities and there was a dramatic impact on greenhouse gases – a drastic drop in emissions. As things began to return to normal following an over two-year tryst with lockdowns and a slew of restrictions, there grew this curiosity as to what extent this period has had learnings on ways to reduce pollution? No wonder researchers across the world started examining thoroughly the learnings inadvertently brought forth by the pandemic lockdowns – basically the impact of the curbs on human activities on air pollution.

After the nationwide lockdowns lifted, it was not uncommon to see people living in polluted smog-hoisted cities exclaiming they
could now clearly see the blue skies in the daytime and the teeming stars over the course of nights, which was otherwise a daydream in heavily polluted zones on Earth.

The local concentrations of the precursors of ozone, a primary component of smog, saw dramatic reductions during the lockdowns. But in addition to briefly reducing emissions of climate-warming gases, this abrupt halt in many human activities — particularly commuter traffic — also created an unprecedented experiment for scientists to examine the complicated chemistry of atmospheric pollutants in cities. “By altering the usual mix of pollutants hovering over cities, the shutdowns may help scientists better understand another longstanding misery for human health: poor air quality in many cities,” noted an article published on the sciencenews.org website (ScienceNews).

Not a lasting solution

So, can we consider misery (such as the pandemic) to be a solution to our environmental woes?

Jessica Gilman, a tropospheric chemist at the National Oceanic and Atmospheric Administration in Boulder, Colo, was quoted in the ScienceNews article as explaining: “Misery is no solution to our global environmental challenges.”

Similarly, a report published in nature.com, referred to climate scientists who noted that during the lockdown periods, “greenhouse gaseous (GHGs) concentration dropped to levels not seen since World War II”. Highly industrialized cities located in cold climate zones observed a higher reduction in air pollution, explained the report while citing studies that reported improvement in air quality due to restrictions on industrial activities during the lockdowns.

Lockdowns led to the shutting down of power plants, transportation, and other industries in countries which led to a drastic cut in GHGs, NO2, PM2.5, PM10 and CO concentration levels.

But the temporary “truce” cannot be viewed as a solution to the environmental woes. Why? Because, as the ScienceNews article explained: “Building a global picture of altered city pollution is no easy task, though. Researchers found that the pandemic’s impact on levels of various pollutants was highly regional, affected by differences in wind and rain as well as by photochemical interactions with sunlight — the intensity of which also changes with the season.”

More than two years have elapsed but the pandemic is not over yet. On the contrary, after a declining trend since the last peak in March 2022, Covid-19 cases increased globally (including in India which saw a 21% increase in new cases and 39% increase in deaths) for the fourth consecutive week, during the week of June 27 to July 3, 2022, as per the latest World Health Organization report.

We have already seen how a prolonged stretch of the pandemic poses a severe challenge to the health condition. There is a growing realization that co-morbidity and decreasing immunity underscore the importance not just of boosters, but also of a clean environment, especially for the most at-risk.

Tackling such an unprecedented situation calls for robust global health architecture for health emergencies and response at all levels. As it is, no one wants lockdowns that led to the shutting down of power plants, transportation, and other industries in countries which led to a drastic cut in GHGs, NO2, PM2.5, PM10 and CO concentration levels. But there is no guarantee that lockdowns won’t return. They did return recently in countries such as China following a fresh surge in the cases.

In view of such uncertainties, what is important is that, and WHO endorses this viewpoint,  tried and tested public health measures should be used to mitigate risk, whether or not you’re in a place where cases are on the rise.

One such tried and tested measure is to remain indoors. But it goes without saying, that even staying indoors cannot be a foolproof measure to protect oneself from killer air pollution or the virus.

In the last several years, a growing body of scientific evidence has indicated that the air within homes and other buildings can be more seriously polluted than the outdoor air. This fact is well registered by the United States Environmental Protection Agency (The Inside Story: A Guide to Indoor Air Quality).

The question therefore arises how can we fight indoor air pollution?

Air purifiers decontaminate indoor air by trapping tiny particles and allergens through the mechanically-advanced filtration technology. Unlike ordinary air purifiers for homes, a multi-stage air purification module with a built-in air ionizer and UV-C disinfector can be a life saver. Using this air treatment system is more helpful for those living in areas with a high concentration of pollens. It is efficient to remove almost all fine particles including Variants Of Concern (VOCs) from indoor air in rooms.

(Your Lungs And You series is an awareness campaign run by an NGO, The Eminent, in collaboration with PetriMed CA, an air purification system with 99.999% filtration and coupled with UV-C disinfectation and air ioniser, using 8 – stage filtration technology).