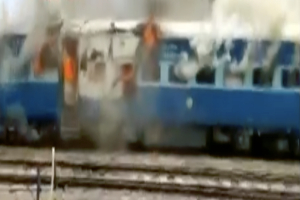 The Centre’s scheme to enlist youth into the armed services for a four-year stint, namely ‘Agnipath‘ brooked violent protests from youths in the northern states of Bihar, Rajasthan, Haryana, Himachal Pradesh and Uttar Pradesh, as well as Gurugram in the National Capital Region, today. While the government’s focus was on reducing the average age of the soldiers in the armed forces by efficiently putting to use the country’s demographic dividend, the protesting youth expressed anger over the perceived lack of social security that the scheme afforded.

Protesters set one coach of the intercity express on fire and also smashed glass windows at Bihar’s Bhabhua Road railway station. In Haryana’s Palwal district Army aspirants pelted stones at police and set their vehicles on fire forcing the police to aerial firing. The administration suspended phone, internet and SMS services for 24 hours in the district.

Protests saw the disruption of rail and road traffic in several parts of Bihar for the second consecutive day. In all 22 trains from the State were cancelled and five stopped after completing partial journeys, East Central Railway said. At Arrah railway station, protesters set alight furniture that they threw on the railway tracks and railway staff reportedly used fire extinguishers to douse the fire. The protesters also pelted stones at the police which had to resort to tear gas shelling to disperse the crowd. Violent protests were reported from Nawada, where the vehicle of Bharatiya Janata Party legislator Aruna Devi was attacked,  Jehanabad, Saharsa, Chhapra, Muzaffarpur, Kaimur, Saran, Gaya, Munger and Buxar in Bihar.

The youth voiced their concern about the stunted length of service besides being ineligible for pension and contraction of the eligibility criteria for the service. The ‘Agnipath’ scheme envisaged recruiting youth from 17-and-a-half years to 21 years. Many youths felt that this contraction in years rendered them ineligible for applying. Defence minister Rajnath Singh in the presence of the three service chiefs announced the scheme on June 14, 2022.

The protests are because this scheme is perceived as a “toffee” thrown at the hoards of unemployed persons, with an eye on reducing government expenses towards salaries and pension emoluments of the soldiers. The protestors blocked both road and rail traffic besides forcing the security personnel to fire warning rounds in the air to disperse them.

The government sought to quell and dispel the fears and concerns expressed by the protestors, stating that the voluntary four-year service scheme was adequately backed by provision for entrepreneurship in the form of financial packages along with bank loans and also incentives for the pursuit of higher education besides recruitment prospects within the state-level security ranks.

The youth also expressed reservations about the lack of skill upgrades made available by the ‘Agnipath’ scheme that can render them jobless at the end of their four-year stint and cited it as a dampener for those intending to pursue a career in the armed forces. In the current year, the government plans to implement the scheme by recruiting 46,000 soldiers. “At the end of their four-year stint, a fourth of them will be retained for long-term service based on a filtration of skills process,” the government claimed.

The youth also dwelt on the collateral faced by aspirants to the armed forces and one of them said, “We have to put in years of prolonged efforts to qualify for the selection criteria that are imposed on those opting for this four-year scheme. After all the hard work and the rigours of a four-year stint, we have to start our careers afresh. It’s just sheer hogwash and any government serious about enhancing employment prospects will not indulge in such chicanery.”

While the government views this as an apt strategy to employ youths for safeguarding our borders as is being practised in Western democracies, scores of protesting youth say ‘Agnipath’ is an unfair scheme that should be retracted at the earliest.