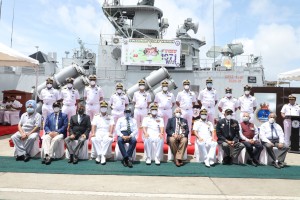 Mumbai:  Swarnim Vijay Varsh is being celebrated across the nation to commemorate the Golden Jubilee of 1971 war victory against Pakistan and the formation of Bangladesh.  As part of the celebrations, the Vijay Jyoti, during its journey across the length and breadth of the country, arrived at Gateway of India, Mumbai on September 1, 2021. It was brought to the venue by personnel of the 15 Punjab Regiment and received by the Chief Minister of Maharashtra, Uddhav Thackeray, in the presence of senior officers from three services, veterans of the 1971 war and other dignitaries.

Today, the Victory Flame travelled to Naval Dockyard and was received there by Vice Admiral R Hari Kumar, Flag Officer Commanding-in-Chief, Western Naval Command, at the Gaurav Stambh Memorial in a solemn ceremony. The Commander-in-Chief paid homage to the bravehearts who laid down their lives during the war by laying a wreath at the Stambh. A ceremonial guard was also paraded to mark the occasion. On completion of this ceremony, the Victory Flame was taken to the 22nd Missile Vessel Squadron, the Killer Squadron that inherited the legacy of courage and bravery from the boats that played a pivotal role in the 1971 war. It was Missile Boats of the Killer Squadron that caused havoc in Karachi in December 1971 and deservedly won the epithet ‘Killers’.

The Navy Day each year is celebrated on December 4 to commemorate the heroic acts of these ‘First Strike’ elements of the Indian Navy that live by the singular aim and purpose of ‘Hit First,  Hit Hard’. The event was attended by some esteemed veterans of the Killer Squadron that had participated in Operation Trident and Operation Python during the war. In an impressive ceremony, Vice Admiral R Hari Kumar felicitated these veterans. Some veterans spoke during the event and shared their glorious experiences of bravery. The event concluded with Rear Admiral Atul Anand, Flag Officer Commanding Maharashtra Naval Area (FOMA), delivering the vote of thanks and reiterating the Killer Squadron’s commitment to remain ever ready to sail into harm’s way and strike fear in the enemy when called upon to do so, in line with the rich legacy the Squadron has inherited from its revered forebears.